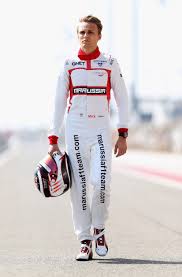 Britain’s Max Chilton is hoping to achieve the highlight of his career on Sunday and win the Indianapolis 500 after coming so close three years ago.

Chilton, 29, is one of three British drivers in the legendary IndyCar race – 200 laps and 500 miles.

“There’s a saying that the race will choose the winner and you have to hope something falls into place and the stars align. Maybe it will fall into place.

“Would winning change my life? I don’t know but it would definitely change my feelings for achieving what I wanted to do. It would make me overall a more satisfied human being, that I’ve accomplished something I set out to do.

“It would definitely be my career highlight – now and probably going forward too.”

‘I slightly tasted the milk – and someone snatched it away’

The winner of the Indy 500 is often pictured celebrating drinking milk – a tradition that has been followed since the 1950s – although Chilton’s chances appear to be slim as he starts 30th out of 33 entrants.

But his experiences of three years ago show anything is possible.

“In 2017 at 40 laps Fernando Alonso was winning,” recalled Chilton. “I was a lap down in the pit lane due to a red flag, after an awful accident for Scott Dixon, then on lap 80 I was leading, so it can turn around very quickly.

“I was leading for more laps than anyone else and was super chilled – it was the easiest race of my career. I got out in front, my car was stupidly fast, no-one could touch me, so I just focused on being flat and on every corner. I led for over an hour.

“I feel like I slightly tasted the milk and someone snatched it away from me, so I definitely want to have that chance again, hopefully sooner than later.”

“Hindsight is a wonderful thing,” Chilton told BBC Sport. “I honestly believe if a few things had changed that day and I had different people helping me I could have won that race, no problem.

“I did a great job, led for 50 laps, defended pretty well and made one slight mistake where I lost the front end and had to do a lift, and Helio Castroneves just got around the outside of me.

“If I hadn’t had to do that lift I would have probably been champion that day, but that’s the way it is.

“The hardest thing in motorsport is to get to the front. I’d love to be in that position again. I enjoyed leading and the good thing is it has given me the expertise to know what to do next time in that position.”

The Indy 500 is normally held in May with more than 200,000 fans packing the grandstands at the Indianapolis Motor Speedway. This time, though, as has happened in all the F1 races this season, no spectators will be in attendance because of the coronavirus pandemic.

Chilton spent lockdown in the UK after just managing to get back from the United States in time, and said he spent “12 weeks not doing anything”, unable to race on a track between March and July.

“I was just running and eating too much food, then trying to burn it off going on my bike,” he added. “There was some naughtiness, some chocolate brownies and ice cream.

“The first race back was a shock to the system fitness-wise, but you soon adapt again.”

Chilton expects a thrilling, if unusual, race weekend and said: “IndyCar is massive here. You normally have 200,000 people and lots of things to do.

“On Saturday you have the parade down town with 100,000 people, but now there is none of that and the next hive of activity will be the green flag on Sunday.

“On Sunday morning it will be very odd and feel like a practice session. When you are barrelling down to turn one the grandstands are normally full.

“But everyone will be racing as hard as ever with no crowd and the winning team and the driver will still celebrate but not get the full sensation of winning it.

“We will mix the strategy up a bit and hopefully it gets us up in the action. It’s going to be different this year but it will still be an exciting finish.”