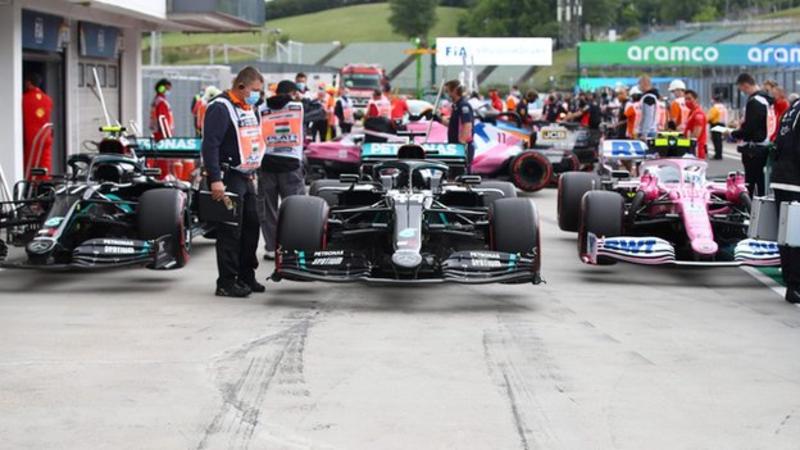 Formula 1 is to ban teams from changing engine performance levels over a Grand Prix weekend.

The move, which is coming into force for the Italian Grand Prix on 4-6 September, would prevent the use of high-power modes used in qualifying.

Governing body the FIA is making the change so the complex modern turbo-hybrid engines are easier to police.

Rivals believe world champions Mercedes have an advantage in this area and that the move could close up the field.

The rule will force teams to use a single engine mode throughout a race weekend.

This would effectively ban power boosts used in qualifying, and for brief periods in races, because teams could not afford to run their engines at that level of performance all the time without causing reliability problems.

Why is this happening?

The FIA felt that the use of multiple engine modes throughout a weekend was opening a grey area where it could not be sure that all power-units were in compliance with the regulations at all times.

The multiplicity of modes means that, in effect, the FIA is having to rely on an average of data points in monitoring how each engine is working.

This means that there are potentially times when an engine could be operating outside the rules and the FIA would not be able to tell.

By restricting teams to one mode, the FIA will be able to monitor the engines at all times, removing this grey area.

A secondary concern, was that the FIA felt the number of engine modes was in danger of transgressing a rule that requires drivers to perform “alone and unaided”.

The FIA felt that modes were being changed so often, at the instruction of engineers, that drivers did not know a lot of the time how each mode was affecting the performance and reliability of the car.

How will it work in practice?

Teams have changed engine modes throughout weekends since the 1.6-litre V6 turbo hybrid power-units were introduced in 2014.

Typically, teams would run the engine at lower power in practice, then turn it up progressively through qualifying until it is in its maximum power mode as the session that defines the grid reaches its climax.

In the race, the power would be lowered again to a mode that gives the best compromise of performance and reliability, but drivers would have access to the highest power modes for limited periods if necessary.

Now, engines will have to be running at the same performance level at all times a driver is on a flying lap throughout a race weekend.

The only exceptions will be laps immediately after leaving the pits or returning to the pits, during a safety car period, or any lap that is at least 20% slower than the fastest lap of that on-track session.

These exceptions mean that teams will still be able to use slow-down laps to recharge the batteries in the hybrid system.

Will it change the competition order?

Mercedes have been dominant in qualifying this year, with a car that over a single lap is nearly a second faster on average than its closest rival.

This performance advantage has not been as marked in races, and rivals from teams using other engines say that Mercedes has made a noticeable step forward with the maximum-power mode used in qualifying compared with any other manufacturer this year.

As a result, they believe that this new rule could allow other teams to close on Mercedes in qualifying.

However, restricting engine modes is highly unlikely to remove all – or even the majority of – Mercedes’ qualifying advantage, as there is no way such a large margin can be explained solely by an engine mode.

And although some believe the move could close up the field in qualifying, Mercedes F1 boss Toto Wolff says the team can use the change to their advantage because it will allow them to run their engine at higher power in races than previously.

Wolff said: “I think it will actually help us in the race because if you can avoid to damage your power-unit in those few qualifying laps you have available in Q3 (the final part of qualifying) and the odd lap in the race, the damage metrics go down dramatically.

“So five laps of qually mode not being done gives us 25 laps of more performance in the race.

“This is something that we believe will give us more performance. If it hurts us in qualifying, and we are not sure, it will hurt all the others in the same way.”

If it favours any team, it will likely to be Ferrari, which is believed to have the smallest power step in qualifying, as a result of the way a number of rule changes since last season have affected the performance of their engine.

And the teams it is likely to harm the most are Mercedes customer outfits Racing Point and Williams, who are in tight battles with rivals and could find their qualifying competitiveness affected.