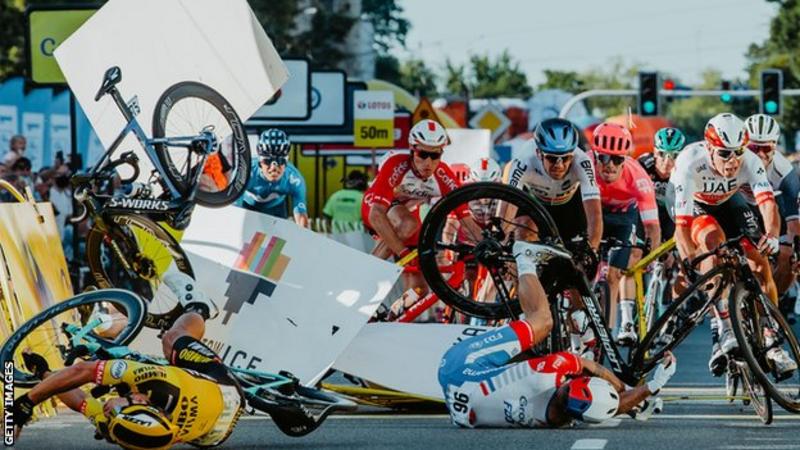 “I hope the UCI will rethink security measures for the riders because that kind of thing shouldn’t happen,” said the 23-year-old.

Cycling’s governing body the UCI has been contacted for comment.

“It was hard to see – I think everyone regrets what they did that day and the organisers will rethink about the barriers. I hope also the UCI will rethink,” said Sivakov.

Jakobsen has said he is “glad to be alive” following the crash which occurred on 5 August at the Tour of Poland.

He was pitched through a barrier and into a race organiser following a tangle with Jumbo-Visma’s Dylan Groenewegen.

The 23-year-old was taken to hospital where surgeons operated for five hours to give him “a chance to live”.

“It was pretty scary,” added Sivakov, who will contest this year’s Tour de France for the first time. “The first time I saw the video it was breathtaking seeing how badly he crashed.

“I don’t think anyone is to blame – Groenewegen maybe does the elbow kick at the end, but you know it’s like it’s a fight [in sprint finishes].”

Groenewegen, who caused the crash, was suspended by his Jumbo-Visma team pending the outcome of a disciplinary process by the UCI.

The 27-year-old has apologised for the crash and was visibly upset when discussing the incident in an interview.

Quick Step team boss Patrick Lefevere even called for Groenewegen to be jailed after the crash.

“I think it’s hard for Groenewegen,” said Sivakov. “At the beginning a lot of people were blaming him, but he was racing, he was fighting for position. I think, with sprinters, probably two Dutch guys have that rivalry and they really fought for it.

“They took some risks, they probably think ‘why do the barriers move like this? Why do they fall’.

“The most important thing is that Fabio is alive and with us and I hope he will be back racing, which is amazing considering that crash.”

The Russian’s views come just days after experiencing an unsettling crash of his own on the final stage of the Criterium du Dauphine. His head struck the tarmac forcefully but he was able to continue to finish fourth on the stage.

“It could have been worse considering how bad it looks. I have been lucky,” he said.

“When you look back at guys riding without helmets [20 or more years ago] – imagine crashing without a helmet – I would have smashed my head and it would have been really bad.

“You have to be pretty crazy to be a rider. I’m happy I’m not a sprinter because these guys are the craziest guys in peloton and take massive risks for victories.”

Teams to be thrown out after two positive coronavirus tests