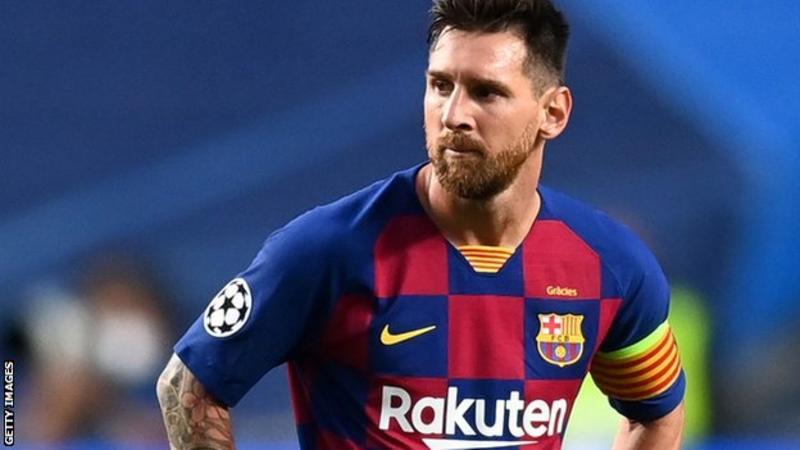 Barcelona still plan to build a team around captain Lionel Messi and are trying to convince him to stay, says sporting director Ramon Planes.

The 33-year-old Argentina forward told the club he wishes to exercise a clause allowing him to leave for free.

“What’s happened has happened and our idea is to build a team around the most important player in the world,” said Planes.

“We want to build another winning cycle led by the best player in the world, the best in history.

“Barca and Leo are like a marriage, where both have given so much to each other, and have brought so much joy to the fans. I think the future is positive. I am an optimist.”

Messi – who has only ever played for Barca – wants to leave after a trophyless season which ended with an 8-2 thrashing by Bayern Munich in the Champions League quarter-finals.

Barcelona believe the clause has now expired and Messi is contracted to the club until 2021 with a 700m euro buy-out clause.

“We need experienced players like Leo Messi, as well as players for the team’s future. We are putting every effort into ensuring that the relationship between Barca and Messi will continue. We are working internally to convince Leo,” said Planes, who was speaking at the unveiling of signing Francisco Trincao.

“Barca has rebuilt itself many times in the past years and it always comes back stronger and right now we are at that stage.”

Some consider the only thing that could placate Messi is the resignation of president Josep Maria Bartomeu and early elections.

But that may not be enough to keep a player who has won 10 Spanish titles and four Champions Leagues with the club.

Planes said: “We have to be very respectful. We can’t make this a public discussion between Leo Messi and Barcelona because neither of the two deserve it.

“I don’t think Leo deserves that and neither does Barca. And we will do a lot of internal work, we have done it and will keep doing it to build a winning Barca.”

Lionel Messi hands in Barcelona transfer request: Where could he go next?