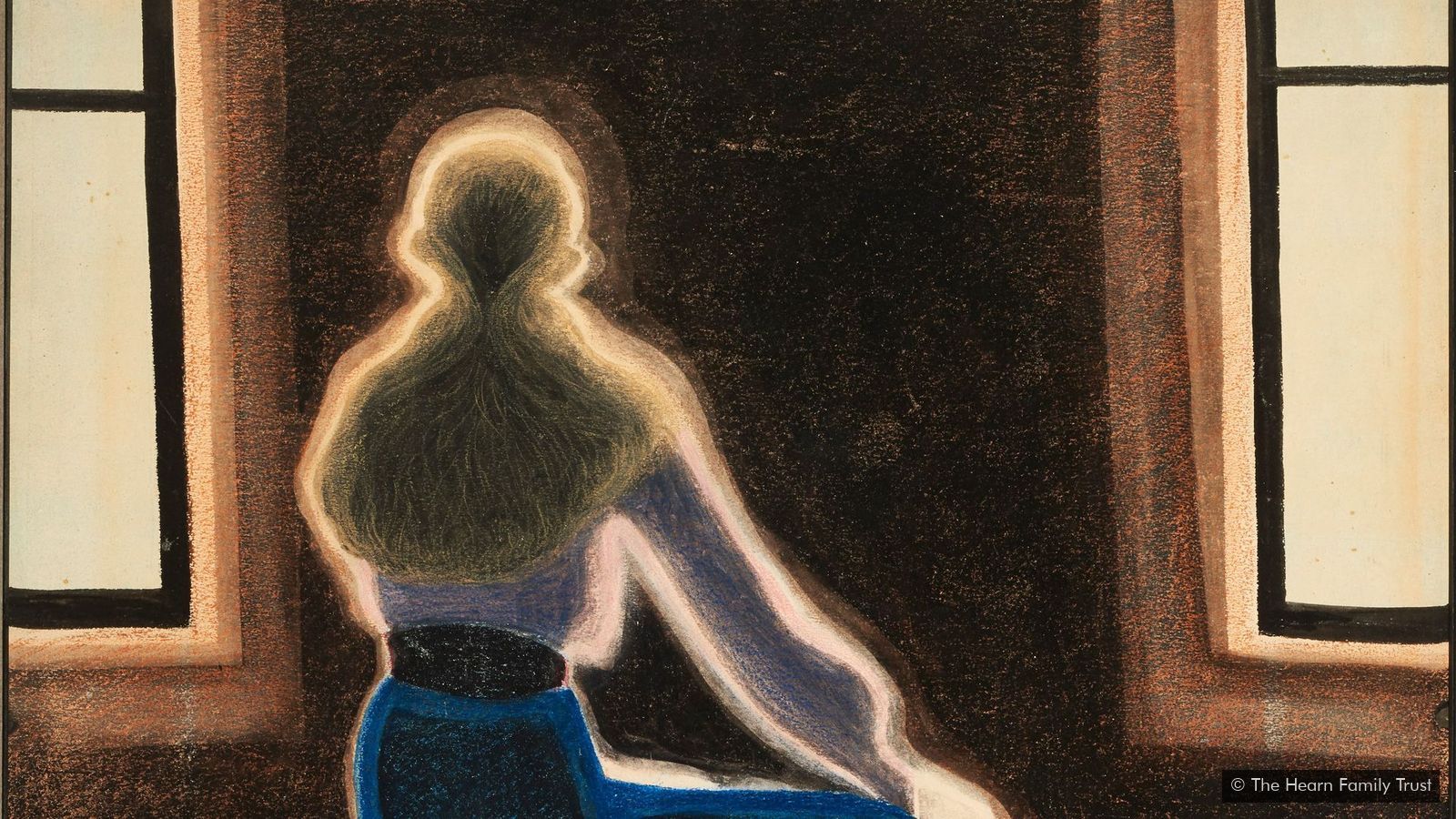 The Belgian artist suffered from insomnia and often wandered the streets alone. His paintings found beauty and light from the darkness, writes Cath Pound. L

Léon Spilliaert’s eerie, enigmatic works inhabit a twilight netherworld between reality and dream. It was a realm he conjured following the moonlight strolls he took to calm his insomnia-induced restlessness. In the dead of night he would ponder the philosophical issues that preoccupied him: the creation of the world, relations between the sexes, and the ultimate fate of man. His thoughts would be transformed into ghostly portrayals of his hometown of Ostend, still-lifes in which objects have a mysterious life of their own, and a series of extraordinary self-portraits in which the Belgian artist bored deep into his own soul.

“There was something about that isolation and solitude that clearly he was attracted to. He seems to have revelled in the creativity it awoke in him,” says Adrian Locke, co-curator of The Royal Academy’s exhibition in London, which brought Spilliaert’s work to a British audience for the first time (the gallery is now temporarily closed – but there is a virtual tour of the exhibition here. 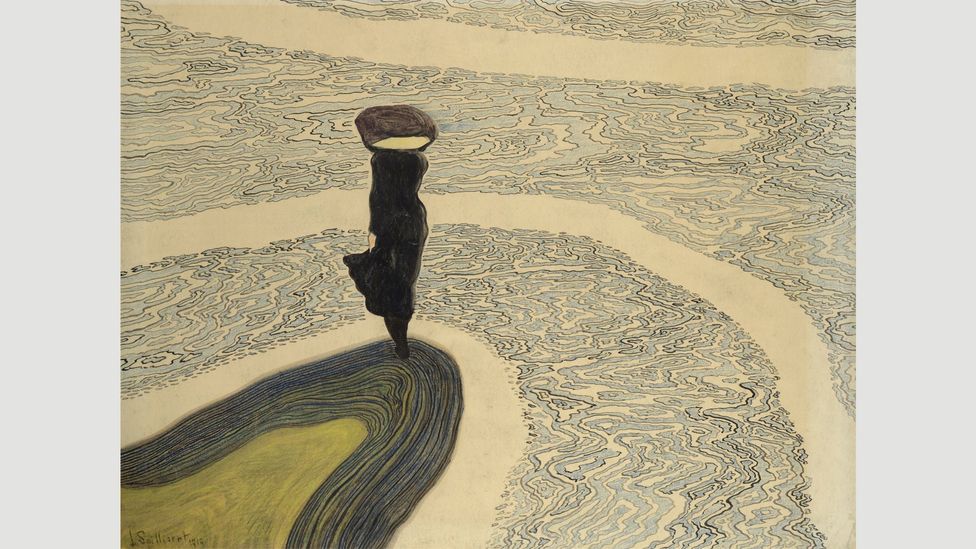 The sea is a constant presence in Spilliaert’s work, such as Woman at the Shoreline (1910); its restless current mirrored the painter’s inner turmoil

Ostend by night or in the hazy ethereal light of dawn would provide his perfect inspiration. From the lighthouse to the Royal Galleries he would stroll along the seafront, which nightfall had left devoid of human presence. His existential quest was amplified by his profound engagement with German philosophy and Symbolist literature. “Like Nietzsche he feels that when he walks undisturbed by normal life his mind becomes very clear and his thoughts are purer, especially in winter when Ostend was so lonely,” says Spilliaert expert Anne Adriaens-Pannier, who co-curated the exhibition.

The sea is a constant presence, its restless current mirroring his own inner turmoil

His reading of Symbolist poets and playwrights had led him to believe that dream and emotion could be reflected in landscape. Ostend would thus come to embody the artist at times of melancholy. In a series of eerily desolate compositions he creates extraordinary perspectives which anticipate De Chirico. Pathways hurtle into the distance towards seemingly absent destinations. Elsewhere night scenes have an almost abstract quality, in which the light appears to emerge from nowhere and buildings take on curious anthropomorphic qualities. The sea is a constant presence, its restless current mirroring his own inner turmoil. 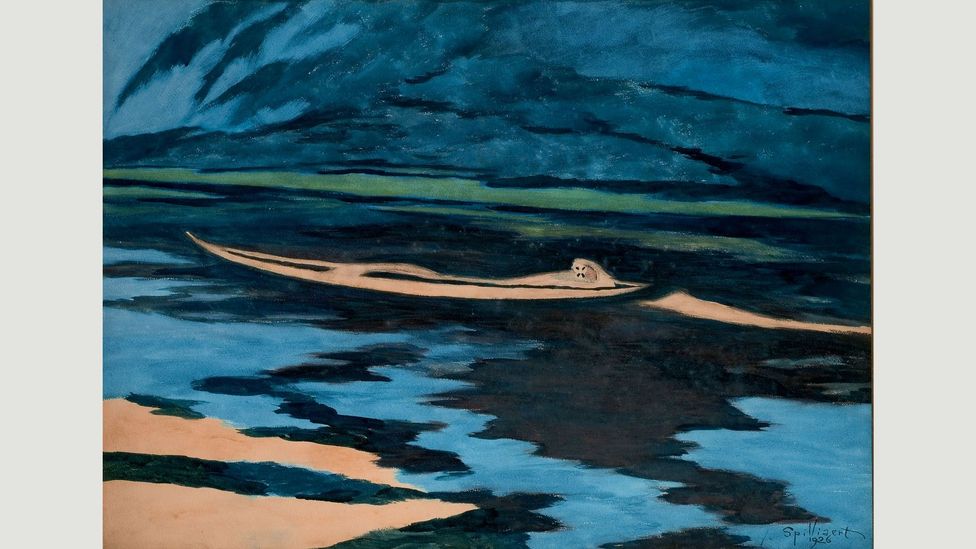 Spilliaert’s eerie, enigmatic works, such as The Shipwrecked (1926) inhabit a twilight netherworld between reality and dream

“That’s why I think he likes to use black ink so much – it’s a medium where you need a lot of water,” says Adriaens-Pannier. She sees inexorable links between this blackness, the restlessness of the sea and Spilliaert’s own troubled state of mind.

But despite their inky darkness and oddly ethereal quality, it would be a mistake to see these works as entirely bleak. Spilliaert may have been plagued by doubt and uncertainty and frustrated by his lack of critical acclaim, but he never questioned the intrinsic value of his art.

Indeed, his limited palette has a meditative effect, which can be strangely calming and even oddly uplifting. “You have to have light to create darkness and you need darkness to give the brightness of the light,” says Adriaens-Pannier. She is astonished at the darkness Spilliaert created with layer after layer of Indian inks but points out that “when you look closely at the works you see that because of these many layers they start to shine.” 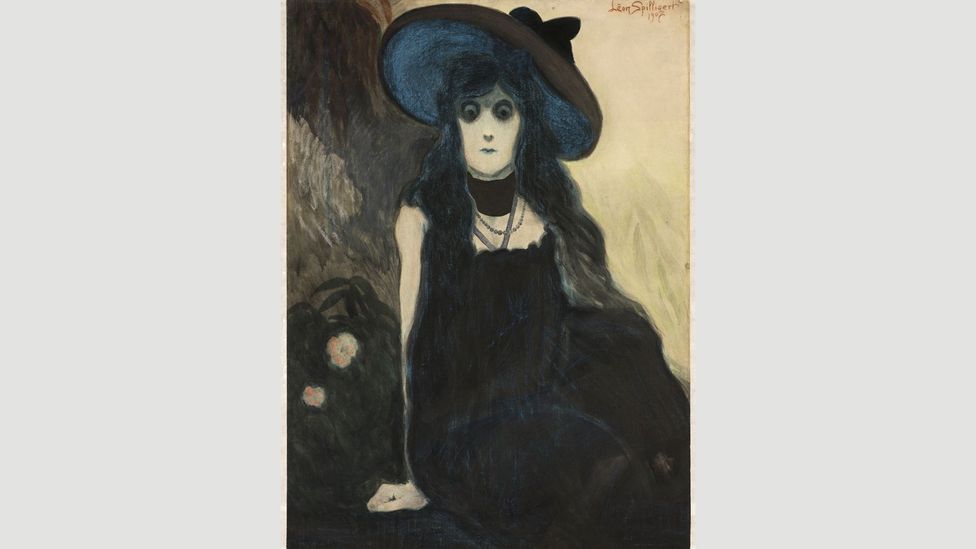 In works such as Promenade, Light Reflections or Hofstraat, Ostend (both 1908), pitch-black streets are pierced by the glow of distant illuminations. It is as if, in the midst of his inner darkness, Spilliaert was consistently searching for the beauty and the light.

“I instinctively feel that he’s embracing those challenges of his life rather than just being defeated by them,” says Locke.

Spilliaert also showed a profound awareness of the challenges facing women in the early years of the 20th Century and seems to have inherently understood the power relations that bred anxiety, isolation and dependence. He showed a moving affinity with the stocky, sturdy fishermen’s wives, shunned by polite society, who would daily wait for their husbands to return. “It’s strange how he gives them nobility,” says Adriaens-Pannier. 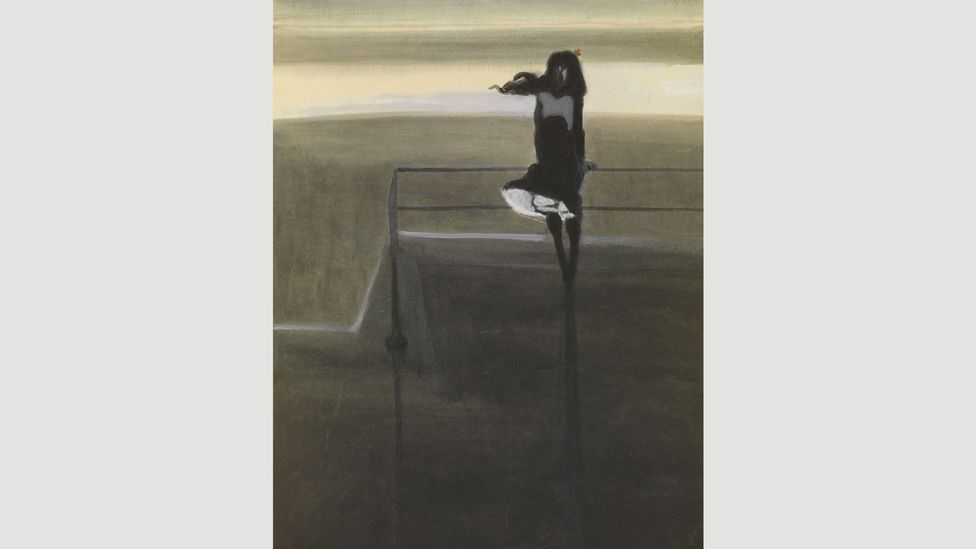 There is a constant sense of solitude and waiting in the young women who appear on empty beaches. But an underlying self-confidence and desire for independence can also be detected. Spilliaert seemed to believe that women would ultimately have the strength to overcome the obstacles put in their way by an unyielding patriarchal society. Nowhere is this more evident than in The Gust of Wind (1904). Clearly influenced by Munch, it features a young girl, her mouth wide open in a howl. But far from experiencing trauma, this girl is turning her back on the tumultuous sea behind her, bracing herself against the elements. She may be screaming “but she is screaming louder than the wind,” says Adriaens-Pannier. “She overpowers it.”

Of course, there was no denying the frustrations faced by many women at the time. The subject of his extraordinary Young Woman on a Stool (1909) is surrounded by a glowing aura as if fizzing with energy, yet she is compelled to sit facing a blank wall, unable to realise the potential rising up inside her. However, one can’t help feeling she yearns to harness the power of the light coming from the windows, and shatter society’s narrow expectations of her.

Spilliaert’s own inability to have his potential recognised weighed heavily on his mind. Although his reading of Nietzsche had led him to see himself as an anointed artist, the failure of the art world to appreciate his unique vision caused him intense anxiety. He confronted his insecurities and doubts head-on in a series of remarkable self-portraits that reveal an intense introspection. “It’s quite unflinching, his gaze,” says Locke. “It’s as if he wants to see through the external into what is inside.” 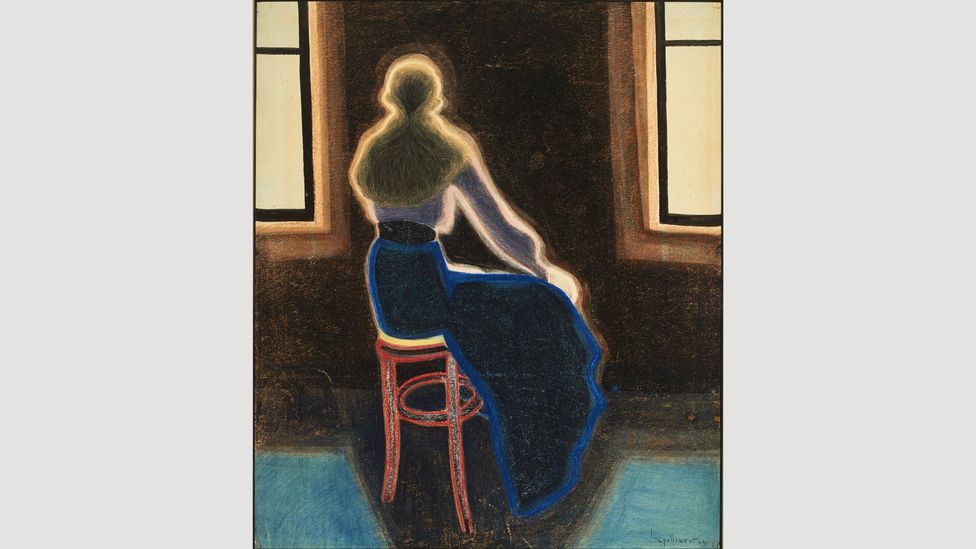 Frequently portraying himself with an electric shock of hair and dark rings under his eyes as if hallucinating from fatigue, he appears to be wrestling with both his inner demons and sleep deprivation in order to discover a deeper understanding of himself. In Self Portrait in Front of a Mirror (1908) his ghostly, mask-like face appears to have entered another world whose existence only he himself was conscious of.

In this nocturnal netherworld that materialised in the studio he occupied in his parents’ house, it was not just landscape that took on a subjective power. Here, inanimate objects also “suggest obscure silent existences to which no one usually pays any attention”’ wrote the critic Franz Hellens in 1912. 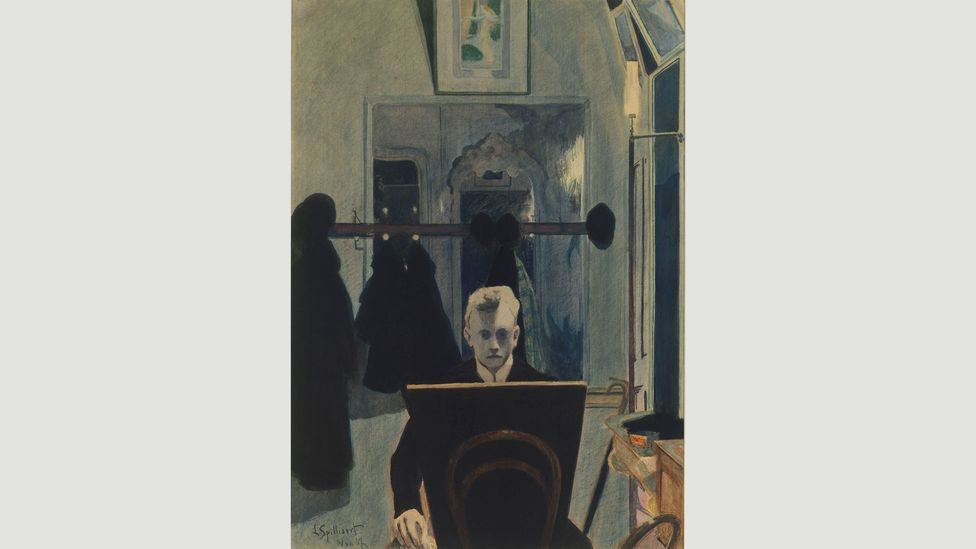 The flasks and gift boxes owned by his perfumier father take on a mysterious charm, as if hiding some deep inner truth within.

“He was fascinated by objects that had no noble life of themselves,” says Adriaens-Pannier. Perhaps this was Spilliaert’s way of showing respect for things which, like himself, were underappreciated or ignored.

In his bedroom, no doubt a place in which he spent many restless hours before heading out on to the streets of Ostend, he was inextricably drawn to a humble blue bowl. He gives it a luminous, effervescent quality, almost as if it is about to start hovering of its own accord. The bowl is illuminated by the glowing lamp of the lighthouse that shone out across the turbulent waters of the North Sea. The rotating lamp would have left his room in darkness far longer than in light, but Spilliaert seized the moment when this ignoble object shone and gave it a sublime, otherworldly beauty. Like Spilliaert himself, it was waiting for that brief moment of illumination that broke through the darkness.

The photographer fighting to save an ancient culture