In recent years, Brazil’s Yanomami tribe have suffered epidemics, deforestation and fires – and all the while, Claudia Andujar has helped them fight back. She talks to Edward Siddons. I

In the dense Amazonian rainforests that sprawl across the Brazilian-Venezuelan border, one of South America’s largest indigenous tribes fears for their future.

Aggressive deforestation has cut swathes through the Yanomami’s homeland. The influx of thousands of gold miners since the 1980s has triggered measles and flu epidemics that have decimated the indigenous population. And after a year of raging forest fires in 2019, some fear the climate crisis could spell the end of an ancient culture. 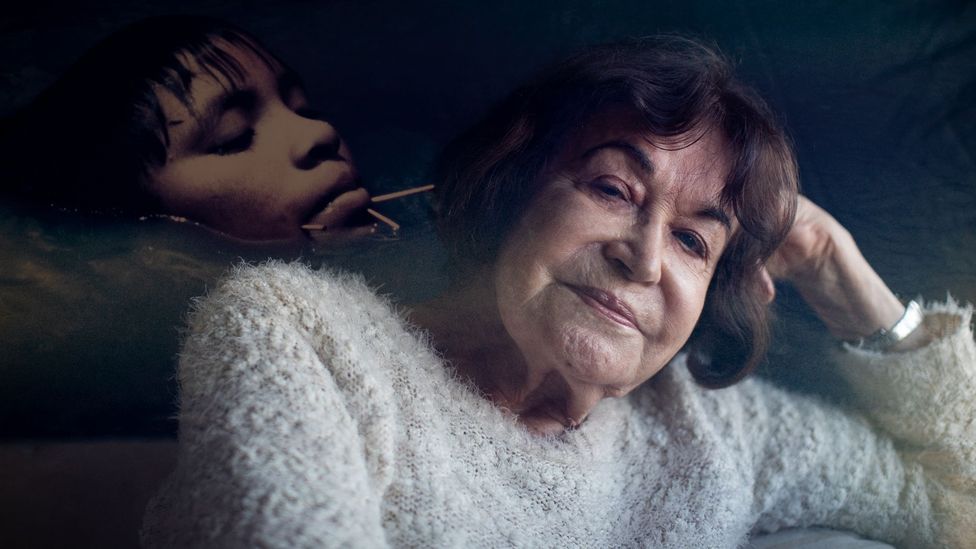 Now the subject of a retrospective in Paris, Claudia Andujar has devoted her artistic career to defending Yanomami life (Credit: Victor Moryama)

The 89-year-old photographer and activist Claudia Andujar has spent five decades both photographing and campaigning for the Yanomami. “This has been the story of my life,” she tells BBC Culture. Her vast archive, now the subject of a major retrospective in Paris (which is currently closed due to the Coronavirus crisis), offers an unparalleled insight into the world of the Yanomami and the existential threats they face. Across some 200 photographs and a video installation, Andujar’s work offers a kaleidoscopic vision of Yanomami life that, she hopes, is more than just a document of a different way of life. Photography, for Andujar, is not art for art’s sake, but art in defence of a dying people.

Andujar, née Claudine Haas, was born in Neuchatel in western Switzerland in 1931, the only child of a Swiss French Protestant mother and Hungarian Jewish father. Her childhood was spent in Oradea, a town which is now part of modern-day Romania but changed hands between Hungary and Romania so many times during Europe’s 20th-Century convulsions that Andujar struggles to remember which country it was that she fled.

In 1944, following the deportation of her father to the Dachau concentration camp and the looming threat of Russian invasion, Andujar and her mother escaped on a refugee train bound for Switzerland. “My mother tired of all the war,” she recalls.

Once settled there, a letter arrived. “I received notification from the Red Cross that all the members of my father’s family had died in Auschwitz,” she recalls. Her father was murdered in Dachau. The immensity of the loss barely registers in Andujar’s voice. At 89 years of age, the elimination of her family is recounted with grim stoicism after a lifetime of retelling.

Europe, for Andujar, offered no future. Barely an adult, she left for New York, before finally settling in Sao Paulo. Catapulted across continents, she found that photography allowed her to communicate her experience of a world in which she was forever an alien.

When the Yanomami women first saw me, they were not sure if I was a man or a woman because I wore clothes and they do not – Claudia Andujar

On reaching Brazil, Andujar travelled widely and first met the Yanomami in the early 1970s on an expedition with a local anthropologist. “When the Yanomami women first saw me, they were not sure if I was a man or a woman because I wore clothes and they do not,” she recalls. “They started to touch me and undress me to find out which I was. When they found out that I was a woman, they invited me to live with them.” 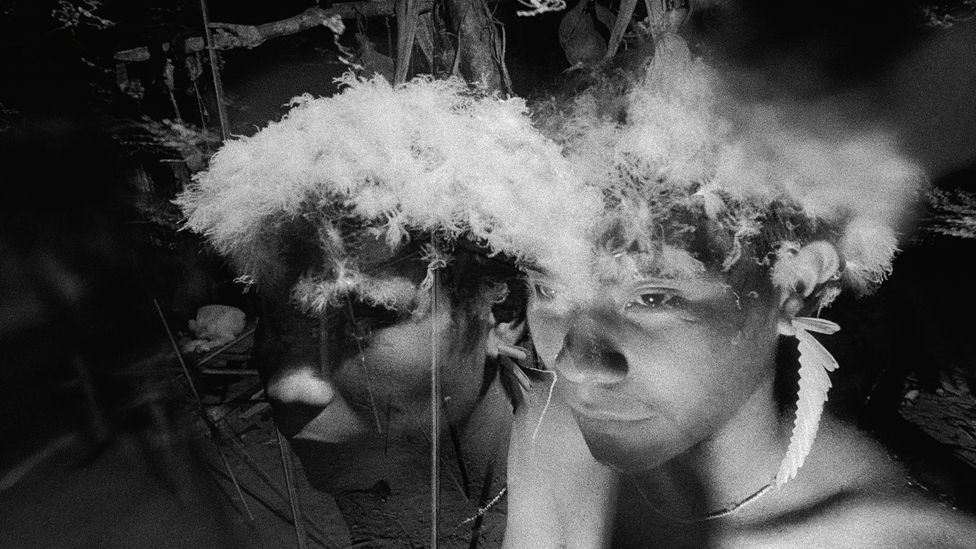 Though portraits from her early years in the Amazon would be published in Realidade, a Brazilian magazine dedicated to photojournalism and reportage, Andujar’s work in the 1970s offers a quiet rebuke to any photojournalistic commitment to distance or objectivity. “I felt that I had to know the Yanomami before photographing them,” she says. By embedding herself in the community, Andujar gained access to rituals ordinarily closed off to outsiders, and came to shoot the Yanomami with an intimate knowledge of their social, political and spiritual worldview.

Andujar’s work captures not just individuals but the shamanic culture that organises Yanomami life. Yanomami cosmology understands the Amazon as a material environment shot through with spirits, known as xapiri, a space in which different spiritual planes converge beyond the perception of the senses. Rituals, enhanced by natural hallucinogenics, allow the Yanomami to commune with – and appease – the spirits of the forest. Using Vaseline-smeared lenses, long exposures and infrared filters, Andujar’s images blur and move as though embedded with both the people and the spirits of the forest.

Entangling herself in the life of the Yanomami meant standing alongside them against the countless threats they have faced over the last five decades. In the mid 1970s, Brazil’s military dictatorship began construction of the Perimetral Norte, a trans-Amazonian motorway that cut deep into the southern tip of Yanomami lands. With the influx of outsiders came violence and disease.

I tried to explain that they shouldn’t try to approach the workers building the highway … there started to be a big measles epidemic. Whole villages were finished off – Claudia Andujar

“I couldn’t fight back the Brazilians so I tried to explain to the Yanomami that they shouldn’t try to approach the workers building the highway,” Andujar recalls. “It was impossible. Many of the workers had illnesses, like tuberculosis, measles, there started to be a big measles epidemic. Many Yanomami died. Whole villages were finished off.” 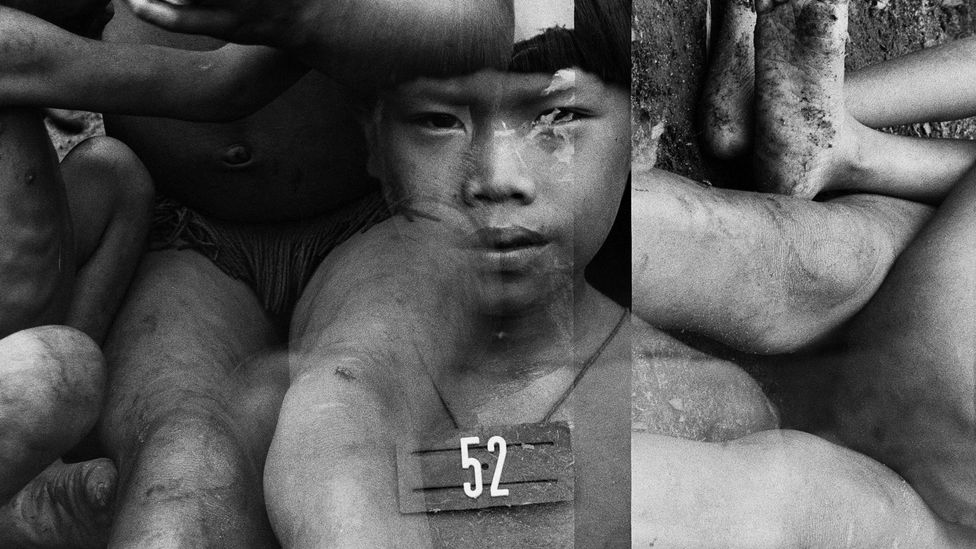 Andujar headed to Sao Paulo, unable to watch as her adopted community died in their droves. She met anthropologists, ethnographers and doctors to explain the threat the highway posed to the Yanomami. She convinced two recently graduated junior doctors to join her in the Amazon, effectively founding the first organised health project in Yanomami land.

The series born of the health project is among the most haunting in Andujar’s body of work. “The Yanomami do not have personal names — they call each other brother, sister, cousin, mother, but they don’t have names like we have,” she explains. The doctors gave the Yanomami numbered necklaces to keep track of treatment plans. In a series of portraits, Andujar depicts Yanomami individuals in their necklaces. While necessary to combat the illnesses decimating the population, the process of numbering people left Andujar uneasy, recalling the categorisation and labelling of her family members, only to facilitate their extermination, in the Holocaust.

I hope there will be other people who go on fighting even when I’m not around, and that the Yanomami will also learn to defend themselves – Claudia Andujar

The health project was just the start of Andujar’s shift from photography to advocacy which would see her largely abandon her camera for years at a time. In 1978, Andujar joined with Yanomami leaders and local activists to found the Comissão Pró-Yanomami, the first organised Yanomami rights group with an ambitious goal: to gain legal recognition for Yanomami lands.

“Going along with the doctors meant I got to know a large part of the Yanomami land and to map the place for the first time,” Andujar explains. It offered a blueprint for the Commissão’s territorial demands. But the pressure the Yanomami and outsiders like Andujar could leverage was limited. They needed international support.

A victory for recognition

Andujar’s work became a chance to spread word of the Yanomami’s plight. The artistic pursuits she had largely abandoned became an invaluable weapon in the fight for recognition. Each photograph became an opportunity for empathy – an invitation to recognise difference and to protect it. International organisations joined the Yanomami calls for recognition, and in 1992, the Yanomami triumphed: the land was declared theirs. 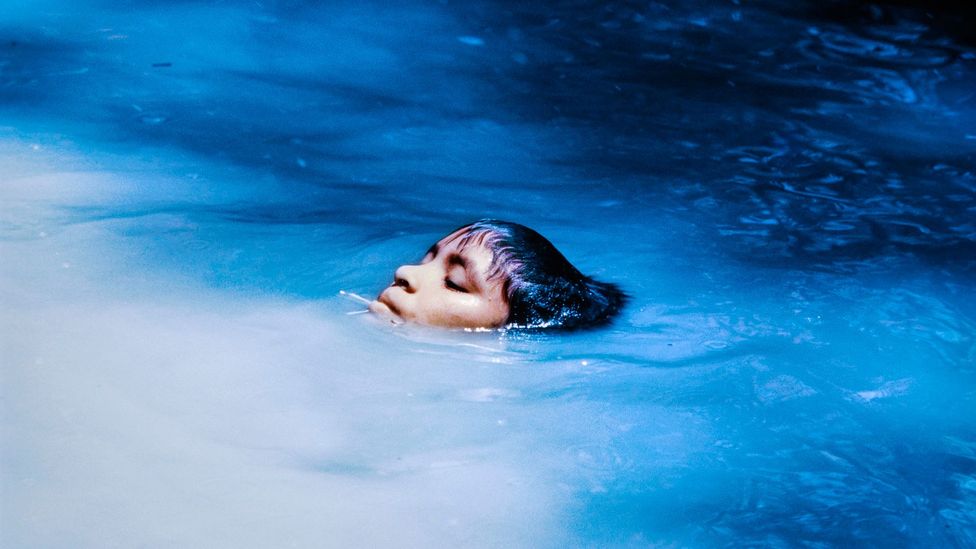 With a new gold rush allegedly being aided by the Brazilian government, the Yanomami people remain under serious threat (Credit: Claudia Andujar)

Andujar tells the story without a sense of triumph – partly because she understands her role as ancillary to the work of local activists, partly because despite five decades of struggle, Andujar is unsure if the Yanomami find themselves in any safer a situation than when she first met them.

Currently, between 10,000 and 20,000 gold miners are roaming across Yanomami lands. Clashes with the local population are common. In 2012, gold miners massacred ‘dozens’ of Yanomami who refused to cede their land, and their presence has also been a factor in the widespread deforestation of the area. The new gold rush, activists claim, is being aided and abetted from the top of the Brazilian government: Jair Bolsonaro, Brazil’s controversial president since 2018, has spoken openly of overriding indigenous control of their own territories, and recently appointed an evangelical Christian missionary to oversee indigenous affairs. Just last week, the UN special rapporteur on the rights of indigenous people warned of the decision’s “potential to cause genocide”.

“I am still very much involved in trying to defend them and their land because I know that their survival and their culture depends on the possibility of being able to go on living according to how they feel, their ability to live together as a people,” Andujar says. But she speaks with the weight of knowing that she may not live to see the Yanomami through the coming fight.

“I hope there will be other people who go on fighting even when I’m not around, and that the Yanomami will also learn to defend themselves in front of all the dangers they face,” she says. “I hope that this will go on even without me being around. That is all that I can hope for.”

Claudia Andujar, The Yanomami Struggle is currently closed but you can visit a micro-site with resources linked to the exhibition.

The hidden toilet humour in a Titian masterpiece