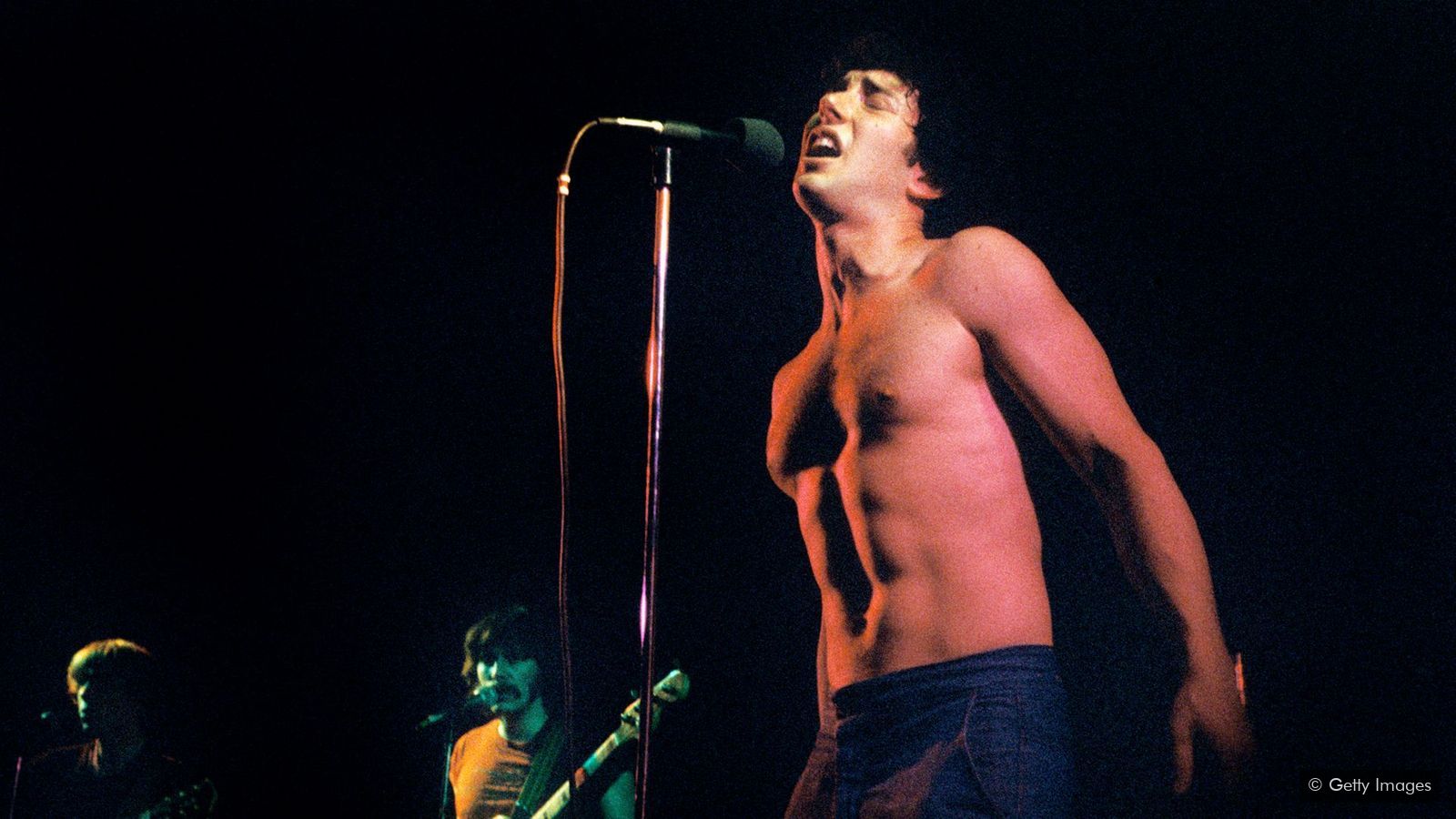 n our latest essay in which a critic reflects on culture that brings them joy, Nicholas Barber pays tribute to a remarkably uncynical musician and his fearless guide to life. I

In the rock ‘n’ roll history books, Jonathan Richman usually gets a brief mention as the link between The Velvet Underground and the British punk movement. The story goes that as a teenager in Boston, Massachusetts in the late 1960s, Richman adored Lou Reed’s avant-garde art-rockers, going to dozens of their concerts, writing reviews in magazines, and even crashing in their manager’s apartment in New York. When he started singing and playing guitar with his own group, The Modern Lovers, he simplified the Velvets’ urban drone, thus persuading the Sex Pistols and their peers that you didn’t need to be a virtuoso to make a record. A couple of chords and your own point of view were enough.

More like this:
-– The song of health after illness
–  Dusty Springfield’s remarkable comeback
–  The Picassos of modern music

But if you were to picture a pop star who combined the Velvets’ druggy hipster cool and the Sex Pistols’ sneery, snotty aggression, they could hardly be further from Richman. For more than four decades, his songs have tended to be warm, whimsical, humorous, and utterly uncynical. They don’t urge violent revolution, they urge us to delight in the buildings and the nature we see all around us every day. They aren’t about heroin or sado-masochism, they’re about fairgrounds, launderettes and long conversations – and that’s before we get to such children’s singalongs as I’m A Little Dinosaur and Hey There Little Insect. A typical lyric goes like this: “People all over the world are good / People all over the world ain’t bad / But if they keep being snobs about it / They ain’t gonna get what they wish they had / And that’s affection.” No one, it’s fair to say, would mistake those lines for Venus In Furs or Anarchy in the UK. But Richman’s unabashed positivity may be more radical and more daring than any of the bands who influenced and were influenced by him. 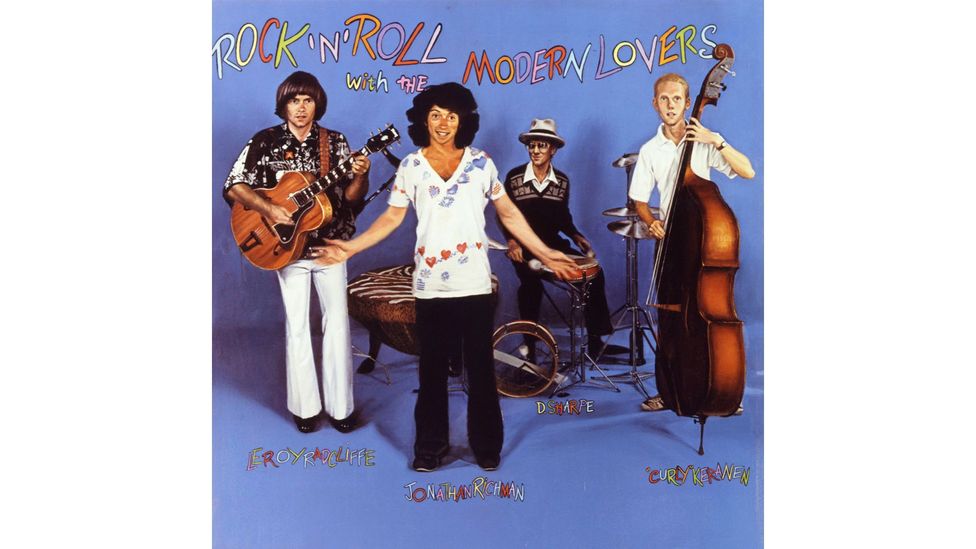 Richman began his career in the 1970s with band The Modern Lovers but subsequently became a solo musician (Credit: Alamy)

To most people, if they’ve heard of him at all, he is the goofy, grinning eccentric who had two minor hits in the 1970s, Roadrunner and Egyptian Reggae, and who later turned up in the Farrelly brothers’ comedy, There’s Something About Mary. To his fans, he is something else. The first album of his that I ever heard was Jonathan Richman & the Modern Lovers, which my big brother had borrowed from a friend. It had been released in 1976, but I put on the vinyl LP in the mid-1980s, at a time when our house shook to the sounds of the noisiest possible punk and heavy-metal bands. It wasn’t like anything I had ever heard. It was infinitely quieter and jauntier than the headbanging music I was used to, but so unpretentious and forthright in what it was saying that it felt more confident, too. I was smitten. I’d found my guru, my guiding light, a rock legend who nonetheless understood someone as wimpy and sensitive as I was. The crucial lesson he taught me was that being wimpy and sensitive needn’t be something to be miserable about. It could be fun. You could even be proud of it.

Soon I was making compilation tapes and preaching the gospel according to Jonathan to everyone I knew. Yes, I admitted, he could seem wide-eyed and childlike. Yes, he could be quirky – sometimes hilariously so. But when you listened to his albums, or saw him singing and dancing on stage in a small club packed with devotees, the world was suddenly a brighter place. As a student, I caught the train to London to see him in concert, missed the last train back to university, hung around a freezing King’s Cross station all night, and was laid low by the flu for days. It was still worth it. A few years later, in 1998, Peter Farrelly called Richman “one of the great artists of the last half of the century”. Would it be too much to add that he is a philosopher who can lead us all to a happier, more fulfilling way of life? Maybe, but I’m going to add it, anyway.

In the early 1970s, The Modern Lovers included Jerry Harrison, a keyboard player who would later join Talking Heads, and David Robinson, a drummer who would co-found The Cars. Their first recordings, produced by John Cale of The Velvet Underground, had an abrasive edge to them, so it makes some sort of sense that the Sex Pistols bashed out Roadrunner in rehearsals. But even back then, Richman was an unlikely proto-punk, with his short, neat haircut, his boyish smile, and his repertoire of ingenuous songs which were staunchly anti-drugs (She Cracked) and pro-ageing (Dignified and Old). Besides, The Modern Lovers’ original line-up split in 1974, and while Richman kept using the band name for a few more albums, his music grew lighter and breezier. For a long time now, he has preferred his nasal vocals to be accompanied by nothing but his own acoustic guitar and a drumkit so small you could carry it under one arm.

His songs are so direct and intimate that he could be confiding in a close friend – and, while you’re listening, you feel as if you’re that friend yourself

So… you don’t come to Richman for his ear-frazzling sonic experiments. But his rudimentary arrangements are part of what makes him unique. There is almost nothing to his songs but the words and melodies, and there is nothing to his words except his own thoughts and emotions. There is no filter, no irony, and the nearest he ever gets to adopting a persona is when he is pretending to be a little dinosaur. That’s why so many of his album titles have his own first name in them: I, Jonathan; Surrender to Jonathan; Jonathan Sings. Yes, his songs are crafted, but they are so direct and intimate that he could be confiding in a close friend – and, while you’re listening, you feel as if you’re that friend yourself.

This kind of sincerity takes a lot more courage than hiding behind sunglasses and sneering. Richman’s famous fans include David Bowie, who covered one of his songs, Bob Dylan, who played one of them on his Theme Time Radio Hour, and Black Francis, the Pixies’ lead singer, who recorded a tribute to him on one of his solo albums. But students of Bowie, Dylan and Pixies can spend hours, days or entire academic careers trying to decipher their more cryptic lyrics, whereas Richman’s disciples know exactly what he is going through and what he is thinking about. 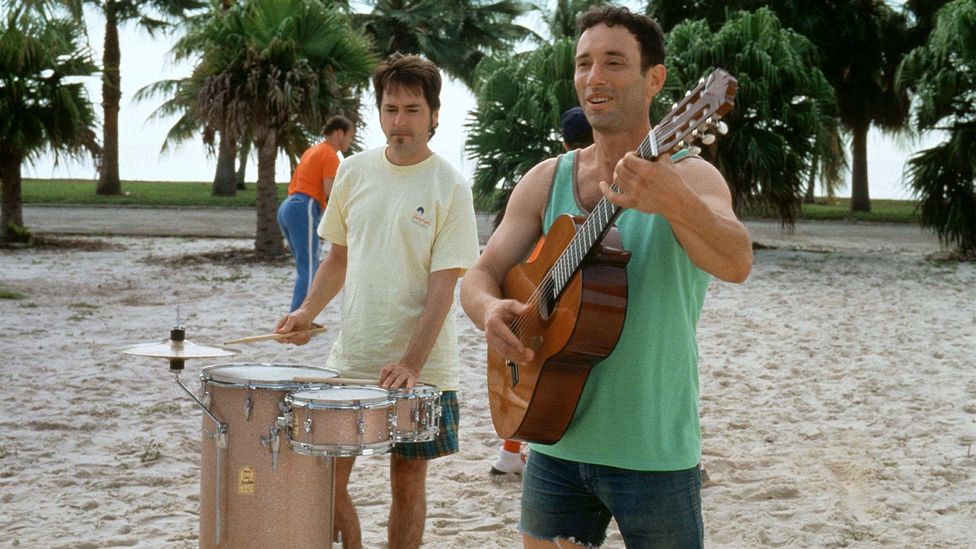 Richman is probably best known to a mainstream audience for his appearance in 1998 comedy There’s Something About Mary (Credit: Alamy)

We know when his relationships are going well (Because Her Beauty is Raw and Wild, and we know when they aren’t (Not Just A ‘Plus-One’ on the Guest List Anymore). We know his favourite artists (No One Was Like Vermeer, Pablo Picasso, Salvador Dali), his favourite musicians (When Harpo Played His Harp, Velvet Underground), and his favourite European cities (Give Paris One More Chance, Nineteen in Naples). We know that he likes travelling by bus and going to the beach, and that he aches for a lost America of faded independent shops and innocent childhood pleasures. Many of us, I’m sure, have done what I did when I was Amtrakking around the US one summer in the 1990s, and made pilgrimages to the places namechecked in his songs: “When I walk to the Museum of Fine Arts in Boston / First I go to the room where they keep the Cezanne.”

Put all those personal likes and dislikes and candid anecdotes together, and you don’t just get a draft of a bittersweet autobiography, but a guide to a fearless way of life in which fame and fortune count for nothing, and integrity and vulnerability are everything. No one has written more piquantly about being lonely (“These streets we all know / They help us cry when we’re alone late at night”). No one is more attuned to what it’s like to be shy and insecure (“You listen to your friends more than to your own heart inside / You listen to them, oh, but you hide”). But don’t despair. Richman assures us that it is important to be sad sometimes. (“When we refuse to suffer, when we refuse to feel / Your life becomes a bore, and you’re suffering even more.”) He advises us to be brave and speak to people. (“Well, I know it takes nerve to reach out and give affection…”) He encourages us to be honest. (“Sometimes we’re bound to argue, sometimes we’re bound to fight / I don’t want her trying to agree with me when I know she must still think she’s right.”) But, ultimately, contentment comes from ourselves, not from the approval of others: “What I needed was not so much to be loved as to love.”

His credo is that we should switch off our mobile phones and computers, get out into the city streets or the countryside, and drink in everything our senses bring to us

There is plenty more romantic wisdom where all that came from. But Richman enrichment goes way beyond matters of the heart. His credo is that we should switch off our mobile phones and computers (he has often said that he doesn’t own either), get out into the city streets or the countryside, and drink in everything our senses bring to us, whether it is the colour of a chewing gum wrapper, the chiming of an ice cream van, or the flavour of a chocolate malted milkshake. If we’re open to it, life can be as joyous and unencumbered as his own live shows, where an acoustic guitar and a tiny drum kit are enough to create magic.

How Björk has helped me heal from heartbreak