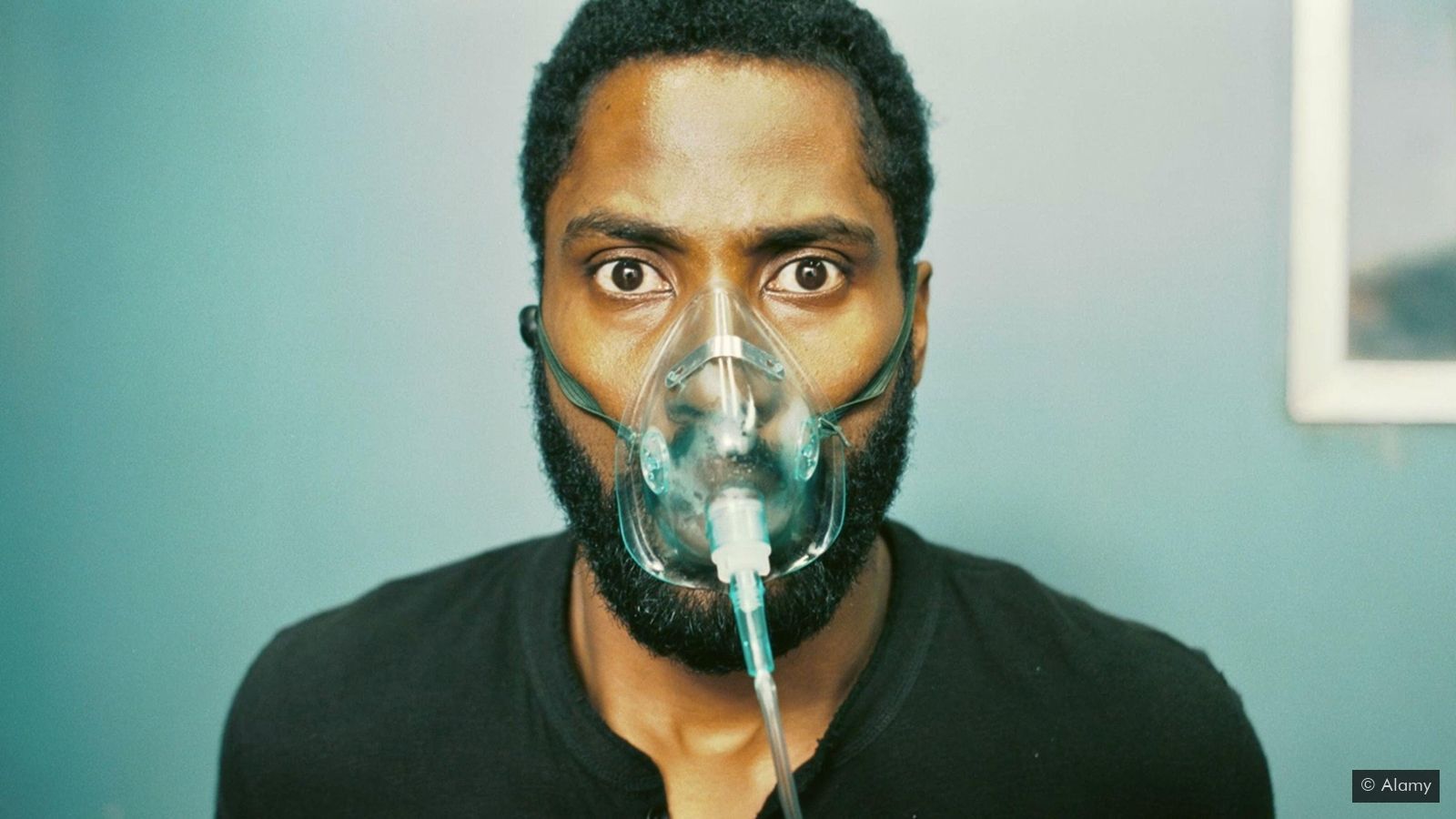 With the news that Christopher Nolan’s latest film will be released outside the US in August, will the blockbuster finally give movie-goers what they want? E

Ever since cinemas closed their doors this spring, people have been talking about the films they’re desperate to see when those doors open again. For some it’s Wonder Woman 1984, for others it’s Daniel Craig’s final Bond movie, No Time To Die. But the name that crops up most often in these fevered discussions is that of Christopher Nolan’s latest high-concept science-fiction thriller, Tenet. Back in March, when some films had their releases postponed by months, and others were shunted to streaming platforms, Warner Bros maintained that Tenet would be on big screens everywhere in mid-July. It wouldn’t budge, nor would it go straight to Netflix or Amazon. Its release, like the dove’s return to Noah’s Ark, would signify that cinema-going was back.

Unfortunately, as the characters in Nolan’s scripts keep discovering, things don’t always work out as expected. In June, Warner’s studio executives accepted that the situation wasn’t improving as quickly as they had hoped, especially in the US. With a reported budget of more than $200m (£154m), Tenet has to be seen by a vast audience in order to break even, and so its release was pushed back to the end of July, and then to the middle of August. And now… well, the current plan is that Tenet will open around the world on 26 August, and in some US cities on 3 September, depending on how safe they are.

Whatever happens, it’s appropriate that the reopening of cinemas should be linked to one of movie-going’s patron saints. Nolan has long been one of cinema’s most zealous and knowledgeable cheerleaders, somebody who tries to pass on his passion for the medium to anyone who’ll listen. He likes to make films about obsessive men, and no one is more obsessive about film than he is. 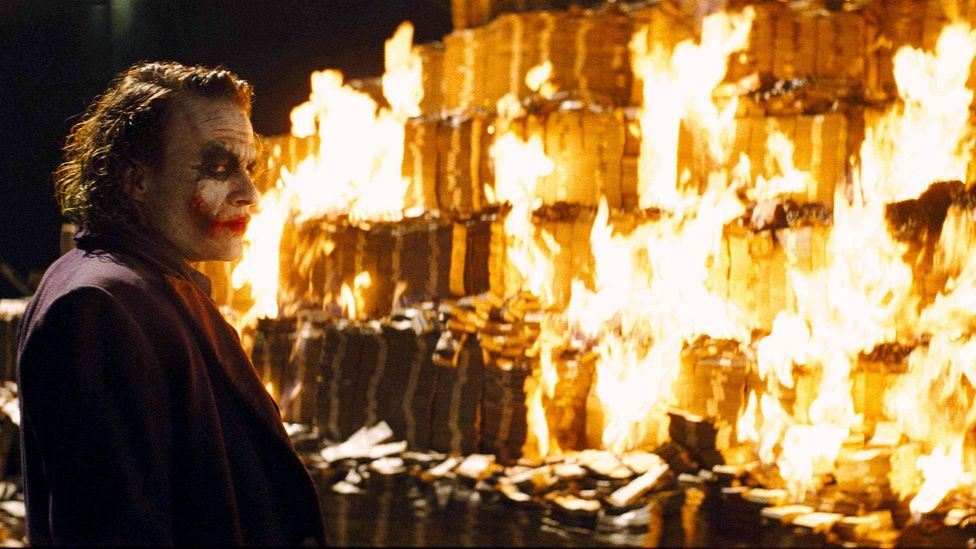 Nolan found inspiration in films rather than comics for his Dark Knight trilogy, which starred Heath Ledger as the Joker (Credit: Alamy)

His favourite topic when talking to journalists and Q&A audiences is his devotion to celluloid and Imax – “the best film format that was ever invented” – as well as his disapproval of 3D and digital video. “It’s cheaper to work on film,” he explained to the Directors Guild of America in 2012, “it’s far better looking, it’s the technology that’s been known and understood for a hundred years, and it’s extremely reliable.” It’s hardly unusual for a director to be fixated on the nuts and bolts of their craft, of course, but other British directors of his generation have a background in theatre (Sam Mendes) and television (Joe Wright), whereas Nolan was making stop-motion shorts with his father’s Super 8 camera as a child, and he completed his first feature film, Following (1998), by shooting it at weekends with friends and family. Similarly, some of his contemporaries, such as Edgar Wright and Alex Garland, enthuse about their comics collections just as readily as they enthuse about their DVDs. But in the interviews Nolan gives about his Batman trilogy, he keeps returning to films as points of reference rather than graphic novels. 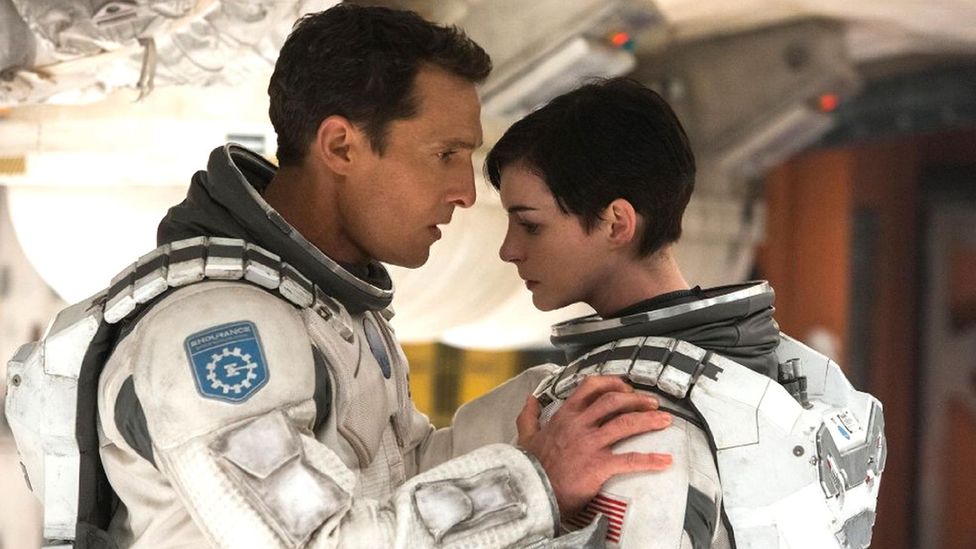 One of Interstellar’s most moving moments is when Matthew McConaughey’s astronaut watches a backlog of messages from his children (Credit: Alamy)

Richard Donner’s Superman gets the most love. “Obviously, some of it is dated, but it’s an epic film,” he told The Guardian newspaper in 2005, “I wanted to make the Batman epic you expected to have been made in 1979.” He also pays tribute to Blade Runner, Michael Mann’s Heat, and the James Bond franchise: “We mercilessly pillaged from the James Bond films for certain aspects,” he confessed in one Variety interview. But the Batman comics themselves get little more than a respectful but cursory nod. Nolan is, first and foremost, a cinema geek.

A love letter to cinema

That’s not just apparent in his interviews, but in his films as well. Numerous themes echo through Nolan’s back catalogue: memory, absent fathers, untrustworthy women. But underlying all of them is a fascination with the film-making process, and how it can be used to achieve effects that would be impossible in a live performance or on a printed page. One of the most moving sequences in Interstellar, for instance, is when an astronaut played by Matthew McConaughey watches a backlog of his children’s messages and sees how, thanks to some extra-terrestrial time dilation, they have grown up without him. Never mind landing on an alien planet: nothing affects him like hearing recorded sounds and seeing images on a screen. The Prestige is the tale of two Victorian stage conjurers, but it’s about Hollywood directors, too: its subject is the dedication and the gadgetry required to leave audiences gasping. And several of Nolan’s films, from Memento to Dunkirk, depend on wholly cinematic techniques – in particular, the way scenes can be shuffled into a different chronological order. 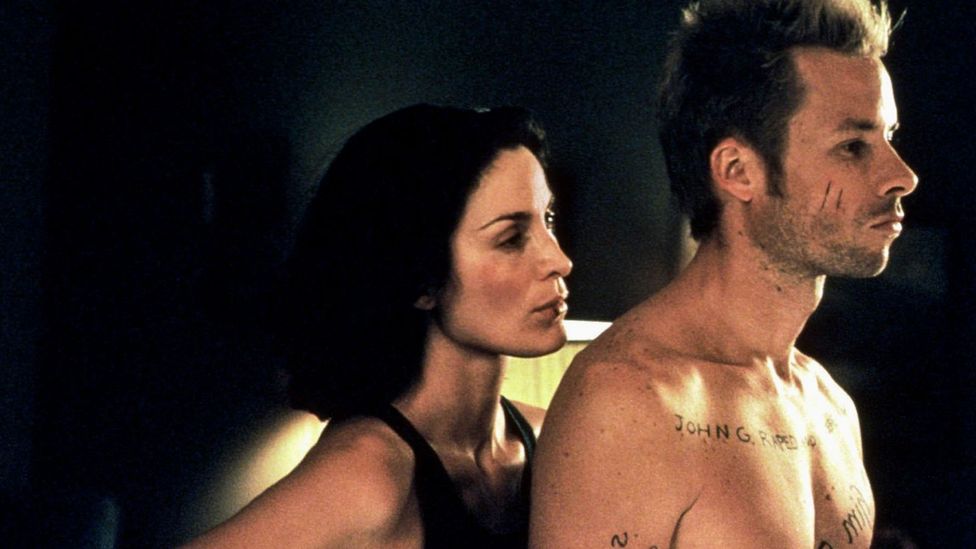 Several of Nolan’s films – including Memento, which starred Guy Pearce and Carrie-Anne Moss – depend on wholly cinematic techniques (Credit: Alamy)

Nolan’s most fulsome love letter to cinema is the one that was delivered exactly a decade ago, Inception – and, as ever, no one in it mentions cinema at all. On the surface, the film is a telepathic heist caper. Leonardo DiCaprio stars as Dom Cobb, a freelance industrial spy who steals secrets from tycoons’ unconscious minds. With a little help from a magical suitcase packed with buttons and cables, he and his team project their psychic selves into his targets’ dreams, and while the poor saps assume that they are snoozing away as they do every night, Cobb’s avatar roams through their thoughts, coaxing them to open up about their companies’ long-term investment strategies. Like so many of cinema’s criminals, he agrees to take on “one last job”, infiltrating the dreams of an industrialist’s son, Robert Fischer (Cillian Murphy), and persuading him to break up his father’s energy conglomerate.

Inception is less puzzling if you see Dom and his colleagues not as psychic secret agents, but as a film crew

What’s striking about all this is that none of the dreams in Inception are anything like the dreams we have in reality. Our own reveries are illogical, fragmentary and fluid, with locations that keep shifting and faces that keep changing. But the dreams in the film are precisely detailed and strictly organised, with settings that look just like physical places, and people who never turn into donkeys or float away through the window. Nolan may be many things, but a surrealist to compare with Luis Buñuel, David Lynch or Charlie Kaufman, he is not. 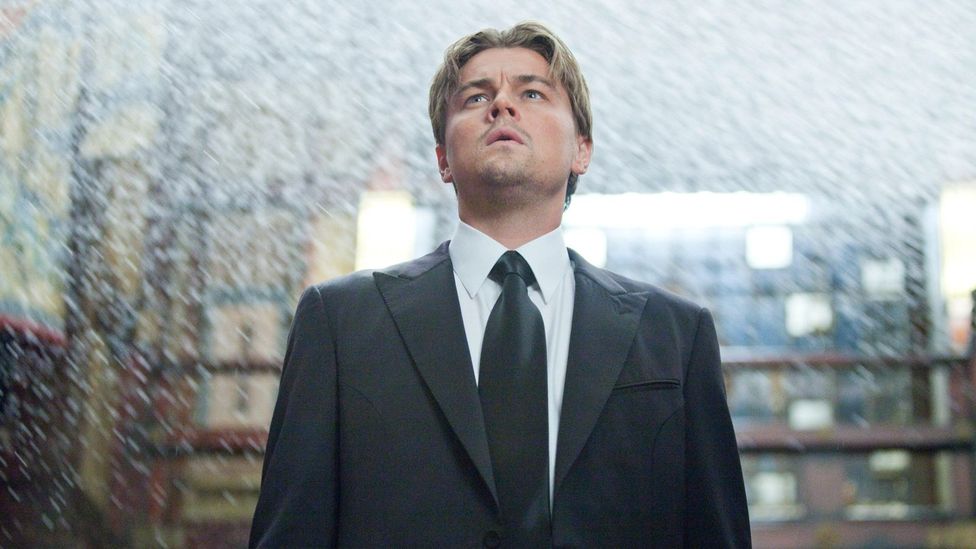 Leonardo DiCaprio starred in Inception, a film that Nolan has described as a film about itself (Credit: Alamy)

It’s strange that a story revolving around dreams should be so fundamentally undreamy. But Inception is less puzzling if you see Dom and his colleagues not as psychic secret agents, but as a film crew. Ken Watanabe’s Saito is the producer who funds the enterprise. Dom is the writer-director who recruits a group of collaborators. Arthur (Joseph Gordon-Levitt) is his assistant director. Ariadne (Ellen Page), the architect he hires to build Fischer’s dreamscapes, is a production designer. And the leading actor is Eames (Hardy), who has the job of impersonating Fischer’s mentor. (The characters in The Prestige and the Batman trilogy are playing roles, too.) Together, the dreams they manufacture – a kidnapping on a city street, a liaison in a swanky hotel bar, a commando raid on a snowy mountaintop base – don’t resemble the woozy, bizarre fantasies we all have after eating too much cheese. But they do resemble action blockbusters: as with the Batman trilogy, James Bond is a major influence.

It’s plain that Nolan is less interested in what flits through our brains during REM sleep than he is in what passes through a projector in a cinema. “I didn’t intend to make a film about filmmaking,” he admitted to Wired when this interpretation was put to him in 2010, “but it’s clear that I gravitated toward the creative process that I know. The way the team works is very analogous to the way the film itself was made… Inception definitely seems to be a film about itself, the more I talk about it.” I wonder if that’s why Dom and his crew invade Fischer’s little grey cells while they are all on a transatlantic plane. Their shared adventures are a series of in-flight movies. 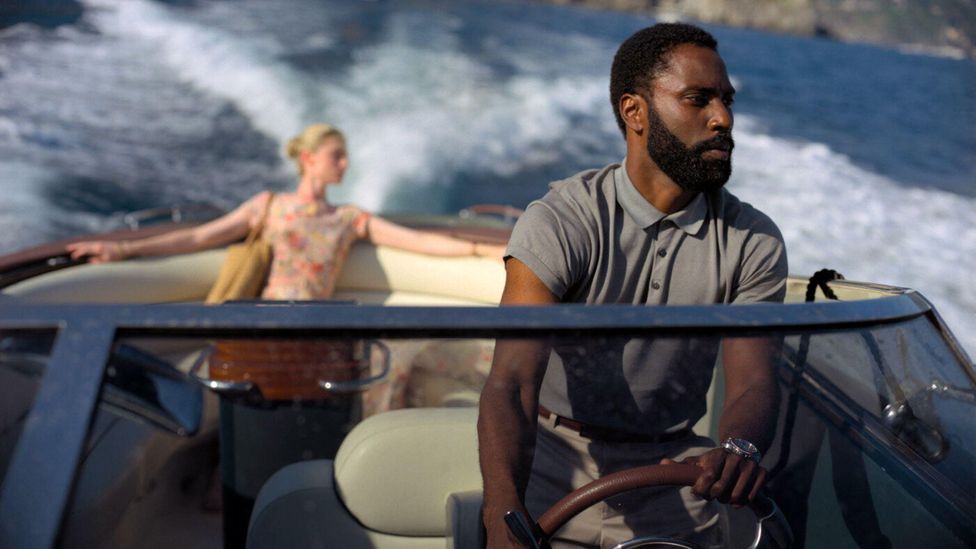 If that raises the question of why Nolan has yet to make a film that deals explicitly with the film business, the answer is that he almost did. Twenty years ago, he drafted a screenplay about Howard Hughes, the billionaire engineer and Hollywood mogul, which he has called “the best script I’ve ever written”. He was due to direct it, with Jim Carrey in the starring role, until Martin Scorsese’s Hughes biopic, The Aviator, got in the way. But as recently as 2017, Nolan said that the film was one “I still intend to make one day”.

For now we can look forward to the imminent arrival – touch wood – of Tenet, in which John David Washington’s hero learns about a mysterious time-reversal procedure. The trailer shows how Nolan put that procedure on screen: he filmed some footage of a ship cutting through an ocean and a car tumbling down a road, and then he ran that footage backwards. It’s simple, it’s spine-tingling, and it couldn’t be done in a book, a play, or a comic. That’s what makes Tenet a quintessential Nolan project. It’s pure cinema.

Is the age of the celebrity over?