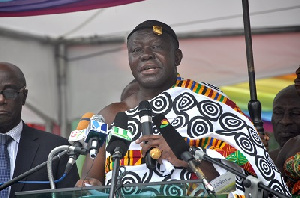 The Asantehene, Otumfuo Osei Tutu II, has advised chiefs, especially those in the Asante Kingdom to resist the temptation of endorsing political parties as the December polls near.

Such acts, the Asantehene insists could undermine the Chieftaincy Institution whose integrity has been questioned in recent times.

His comments come after some chiefs openly declared support for presidential candidates of some political parties in the country.

The Director of Communications at the Presidency, Eugene Arhin in an interview in Accra said close to 95 percent of chiefs across the country have endorsed President Akufo-Addo for a second term bid.

Nana Owusu Kontoh II of Mehame in the Asutifi South Constituency in the Ahafo Region has backed the NDC flagbearer John Mahama for ensuring development in his area and other adjoining communities.

The Chief of Dormaa also endorsed former President Mahama during a recent visit to the Bono Region.

The Asantehene, however, believes chiefs are seen as symbols of unity in various communities, therefore, must conduct themselves in a manner that will promote peace rather than undermining national unity.

“When matters get out of hand, chiefs are the people who will be called upon to ensure calm. But if we engage in political activities we will not be trusted as neutral, and this will be worrying.

“We all have our political divide but our institution does not permit us to disclose our stance,” he reminded them.