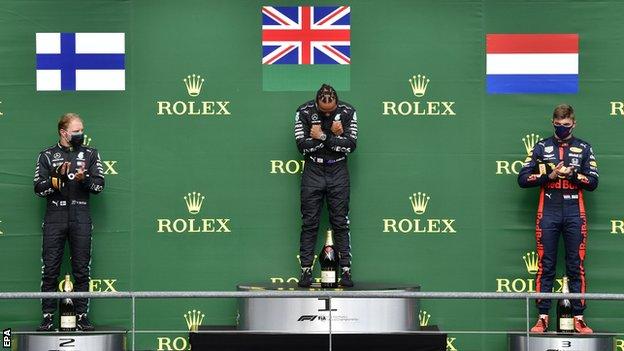 On Sunday, after his fifth win in seven races this year, Lewis Hamilton recalled how, as a teenager, he responded to watching Michael Schumacher’s seemingly endless series of victories with Ferrari in the early 2000s.

Hamilton says he “would have woken up, had my bacon sarnie and watched the start and gone to sleep and woken up at the end, then watched the highlights because it’s much shorter”.

So the Mercedes driver has sympathy with those who may feel the same way about his success now, which will before too long see him break the records Schumacher set 15 or so years ago.

“I can’t speak for the fans but, having been a fan growing up and lived in different eras and watching the Schumacher era, of course I know what it’s like,” Hamilton said.

“I enjoy myself in the car. I am still able to enjoy the battle, looking where Valtteri (Bottas, his team-mate) is, what times he’s doing, the gaps, trying to get the perfect balance every lap. That is still a massive challenge for me but it is just not as fun for people to watch.

“When you’re in it, it’s a bit different. But of course I would love a wheel-to-wheel race. I hope the next races… the Red Bulls have improved, I really hope we have more of a race. Everyone wants to see us all battling together.”

The 89th victory of Hamilton’s career, in Sunday’s Belgian Grand Prix, will not go down as a classic, despite the grandeur of the surroundings.

Spa-Francorchamps is one of the greatest race tracks ever built, and to a man the drivers love it. But Red Bull’s Max Verstappen described his race to third place behind the two Mercedes as “boring” – largely because of the amount of tyre management needed by the front-runners to make the end on a long stint after an early safety car period – and Hamilton agreed.

But a soporific race and another Hamilton victory should not distract from the fact that something special is happening here. It might not always be exciting to watch, but history is being made in front of our eyes.

Before the end of this season – quite some time before the end, the way he is going – Hamilton will become the most successful driver in the history of the sport.

It is as much of a privilege to watch a sportsman operate at the rarefied levels Hamilton is achieving as it is to see Lionel Messi score a wonderful solo goal, playing at a level of which other footballers can only dream.

Of course, Hamilton has the best car, but so does Bottas.

In qualifying on Saturday in Belgium, Hamilton was on pole from the Finn by 0.511 seconds. Verstappen was just 0.015secs further behind in third.

In the championship, Bottas is trailing Verstappen by three points, while Hamilton is leading the Dutchman by 47 – almost two clear wins.

It is not, whatever anyone says, all about the car.

The hard work behind the success

Hamilton’s success is founded on an immense natural talent, but what is less well appreciated is how hard he works at it. This year is providing another case in point.

Hamilton dominated last year’s championship, too, although not in the same way as he is this year. But he felt his qualifying was a weakness – he took ‘only’ five pole positions – and he came into this year determined to put that right, while not harming in any way his performance level in races.

The results are clear. His pole lap in Belgium on Saturday, the foundation for his win, was a work of art. Team boss Toto Wolff called it “extra-terrestrial”. Others in Mercedes felt it was one of the best they had ever seen from him.

Hamilton’s average advantage in qualifying over Bottas so far this year is 0.388secs – more than three times what it was over the course of last year, and his biggest over a team-mate for a long time.

How has he made such a big step forward?

“Last year,” Hamilton said. “Valtteri was putting in great laps as always but I think I was generally underperforming in qualifying, which is usually a strength of mine. It was understanding these tyres and how I utilised it with my driving style.

“This year, I have had to make a couple of adjustments, and with this car it seems to work quite well. So now I am back to being able to produce qualifying laps that I was able to do before last year and on a more consistent basis.

“It is work in the background, it is stuff we do on the simulator, stuff we do with set-up. But getting that right without affecting the race is the fine line.”

In the preparation for that crucial minute and a half or so on a Saturday afternoon, Hamilton has made a significant change this year.

In previous years, if he made a mistake on a flying lap in practice, Hamilton’s tendency was to abandon it and try again next time around. This year, he hasn’t been abandoning laps, because he has realised if he carries on with them, there is something to be learned in the remaining corners, even if the ultimate lap time won’t be there.

There have been other changes in his preparation, too, in the way he builds up to that final lap, which remain under wraps for now. And then there is the political and social backdrop to this year, and the relevance of it to Hamilton’s place in F1 as the sport’s first and only black driver.

As I explored in my piece after qualifying, Hamilton was moved by the death from cancer of the actor Chadwick Boseman, whose most famous role, in the film Black Panther, the first to feature a black superhero was, as Hamilton put it, “such a remarkable moment for the black community”.

It was another devastating piece of news in a year in which the struggle of minorities for equal rights and treatment is finally at the forefront of the world’s attention following the death of George Floyd in May.

A few days before F1 travelled to Belgium, there was another incident in the US involving the police and an unarmed black man that caused headlines around the world, when Jacob Blake was shot seven times in the back, and left paralysed.

“I have generally been feeling a lot of weight on my heart and spirit,” Hamilton said on Sunday. “When you are watching the news and seeing what is happening around the world, I feel really quite affected by it.

“So when I woke up and got the news (about Boseman) from a friend – who said: ‘I’m crying writing this message’ – and then reading the news, I broke down. I remember just trying to pull it together and make sure I delivered on that day.

“Naturally we had to do the work with the engineers. They did great work and got the car where I needed it, and I was able to execute. But it is partly also a mental thing.”

Inspired by the knowledge of the message he is sending out as a black man about to break all the records in a sport which knows it has a problem with diversity, Hamilton is reaching new heights in 2020.

“Last year was one of my best years, if not the best year,” he said, “but as I said qualifying was all of a sudden I had a bit of a slump there.

“The goal every year is to improve physically and mentally, with the methods you apply, and I definitely think I have been able to do that this year. So, yes, I feel I am driving at my best.”

What a difference a year makes

A year ago, Hamilton finished a close second at Spa, after a race spent putting the heaviest pressure on Ferrari’s Charles Leclerc, who withstood it to take his first victory, after starting from pole.

On Sunday, after what was possibly Ferrari’s least competitive showing at a grand prix for 40 years, Leclerc finished 14th, one place below his qualifying position.

It was a sobering weekend for the Italian team.

Ferrari have been struggling on the straights all year. So, with its long, flat-out sectors at the beginning and end of the lap, Spa was always going to be a difficult weekend. But no-one expected it to be this bad.

Both Leclerc and team-mate Sebastian Vettel, who was 13th, finished behind Kimi Raikkonen in the Alfa Romeo, a team with a fraction of Ferrari’s resources who buy their engines from Maranello, and whose car has been on average 1.3secs a lap slower this year.

And in the closing laps, after a second pit stop made simply to “try something different” when Ferrari had nothing to lose, Leclerc spent several laps before he managed to pass the Haas of Romain Grosjean – another Ferrari customer team, whose car has been a second a lap off the works ones this year, and whose tyres were considerably more worn.

What on earth was going on?

Ferrari are suffering from two main problems this year – a car with too much drag and an engine with insufficient power. A very bad combination.

They had the best engine in F1 last year and now clearly have the worst.

The reason for this is that there have been a series of rule clarifications over the past few months that have affected Ferrari’s engine more than the others – in addition to a confidential settlement made with governing body the FIA, who said they believed the Ferrari engine was not running legally at all times last year, but could not prove it, an allegation Ferrari reject.

Leclerc’s qualifying time this year was 0.477secs slower than his pole lap in 2019. Comparing the two laps from data available to all the teams, the Ferrari was 1.214secs quicker in the corners this year but a massive 1.608secs slower on the straights.

On Sunday evening, Red Bull team boss Christian Horner said all this had left a “sour taste” in his mouth, thinking of the wins his team might have had last year had Ferrari not had their engine advantage. Wolff agreed.

But that doesn’t explain Ferrari’s lack of pace compared to their customers.

Rivals believe that the engine advantage led Ferrari down a design path for the last couple of years that created a car with a lot of inefficient downforce. But now they have had that power advantage taken away, the extra drag is a penalty not a benefit.

At a high-speed track such as Spa – and likely in Monza next weekend, too – the only solution is to keep taking downforce off, which means the team ends up in ever-decreasing circles, with the wrong downforce level, the tyres not working, and the car difficult to drive, which it clearly was.

To turn this around, Ferrari will need to reset the aerodynamic parameters it uses to deign its car. There are, team boss Mattia Binotto said, “no silver bullets – patience and stability are required”.

What remains to be seen is how long Ferrari’s management are prepared to provide them.

Lionel Messi: Is Barcelona captain and Man City target as good as ever?