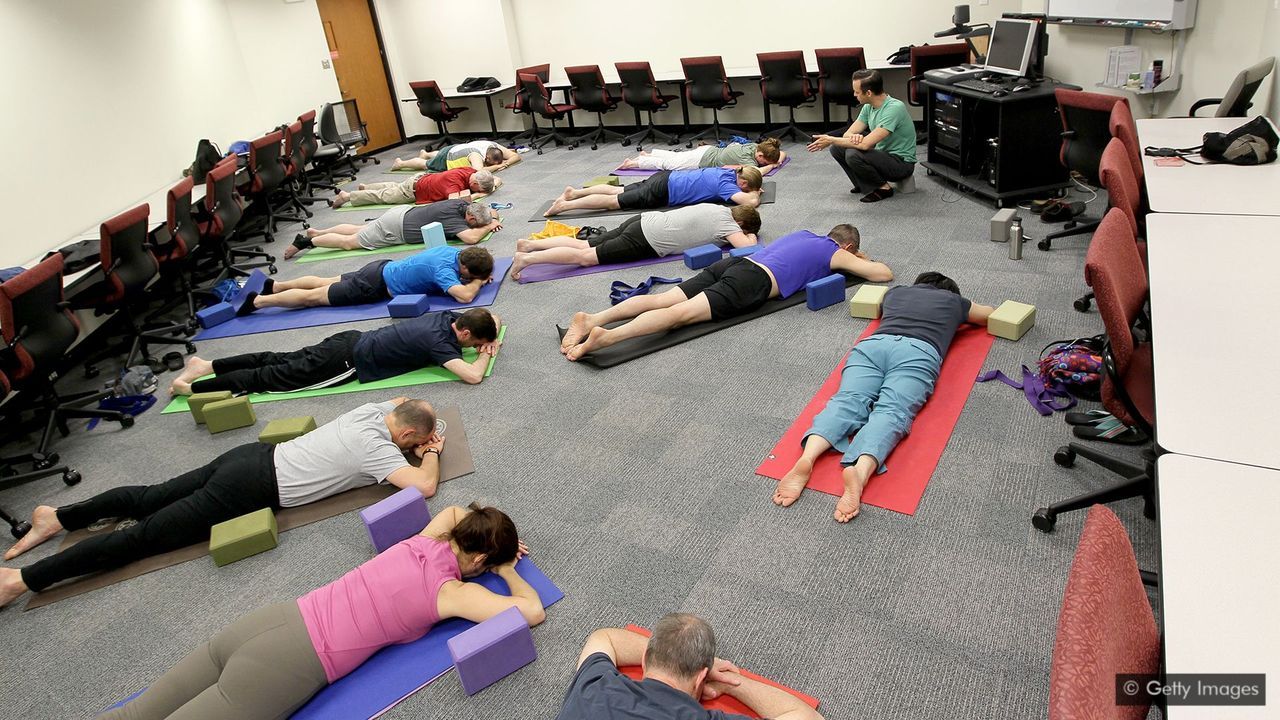 Many corporate perks claim to improve wellbeing – but often it’s the boring solutions that are the most effective.

From free snack bars to fridges stocked with chilled beers, gym memberships and time off for travel, more businesses are offering corporate wellness perks to attract and retain employees.

They are eye-catching offers meant to boost recruitment and staff retainment. “When we’ve got a lot of competition for jobs, more perks come into play,” explains Susan Cartwright, professor of organisational psychology and wellbeing at Lancaster University. “When there isn’t, these perks disappear.”

Current job market dynamics mean employees can call the shots. We’re quicker to shun jobs that don’t work for us and more likely to career hop than in the past. Data collected by the United States Bureau of Labor Statistics shows that men between the ages of 25 and 34 spend on average just 2.9 years with each employer – a drop from 1983, when the average tenure was 3.2 years.

Savvy employers now dangle a raft of benefits in front of workers to keep them in place. Many also offer incentives meant to improve wellbeing – which is important as mental health becomes more of an issue for companies. But which benefits work and which ones don’t? And if a work perk is a gimmick, what is a boring – but effective – alternative?

Some of the biggest, self-consciously “coolest” businesses including Netflix and the Virgin Group offer unlimited holidays to employees, allowing them to take as much time off work as they’d like. Where big firms lead, others follow: 5% of companies offer unlimited leave, according to the Society for Human Resource Management (SHRM), an American HR association, up from just 1% in 2014.

So-called unlimited or “open” leave boosts staff self-worth in many ways, says Suzanne Goulden of SHRM. “Employees really appreciate being treated like the adults they are and for the most part being allowed to determine their leave needs.”

But the effects are unproven. “From a PR point of view, it’s great,” says Cary Cooper, professor of organisational psychology at Manchester Business School. But he adds: “We don’t know if people take it up.”

Taking holiday is beneficial for both businesses and workers: a 2015 study found that employees who take all their mandated holiday time improve their chances of getting promoted and a pay rise by 6.5%, compared to those who leave 11 or more days of their entitlement untouched.

However, as humans we like rules, and instigating an all-you-can-take approach to holidays at work can cause employees anxiety. “You know structurally what’s happening when you’re told you get four or five weeks off,” says Cooper. Different line managers may have different approaches to taking time off, and employees can’t decipher that.

Given only 40% of UK workers use their full holiday entitlement anyway, removing rules can cause more difficulty

Given only 40% of UK workers use their full holiday entitlement anyway, removing rules can cause more difficulty. Having a well-staffed company able to cope when people take their allotted holiday is much better than a free-for-all where no one knows where they stand.

As for unlimited leave, introduce it slowly and make sure there are clear indications at all levels of the business that taking leave is actively encouraged. “One of the growing pains for an organisation making this kind of move is people figuring out what’s acceptable,” says Goulden. “Keep repeating the message: ‘Take the leave that you need.’”

Some companies have managed to formalise holidays while maintaining the unlimited spirit. British supermarket chain Asda has a plethora of “career break” schemes tailored to employees of all ages, whether they are 20-somethings wanting to travel or people in their 60s seeking time off to help raise grandchildren.

The Friday night fridge full of booze for employees has become a start-up staple around the world, but it turns out free beers are not particularly highly prized. Employee benefit company Perkbox surveyed more than 2,300 people about the perks they received and their attitudes to them. Their main finding? “Some of the stuff you think is really trendy wasn’t at the top of the list of what people wanted,” says Saurav Chopra, Perkbox CEO.

Free alcoholic drinks on Fridays came in at number 38 on Perkbox’s list of the most favoured benefits, just below free massages. “A lot of these benefits can’t be sustained,” Cartwright explains. “They’re quite gimmicky, quite faddy, and people resent when they get taken away – even though they probably didn’t want them in the first place.”

It’s the same for free evening meals for those staying at work late – a so-called “perk” Cooper hates. “Think about what that does,” he says. “The employer thinks it’s a perk, but on the other hand what you’re doing is reinforcing a long-hours’ culture.”

Of course, the value of these perks does depend on the type of workplace. In low-interaction environments with high turnover they can play an important role in developing staff loyalty. But, says Cartwright, instead of trying to make the office more like a home, employers should let people work from their own homes. “Most people that do flexible working do longer hours and feel a sense of gratitude to their employer,” she says.

Instead of trying to make the office more like a home, employers should let people work from their own homes

Many of the concerns employees feel about unlimited holidays are shared in their approach to flexible working. “The evidence is if you want to work flexibly and do, you’ll be more productive and satisfied in your job,” explains Cooper. “But it has to be in the context of an organisation that is committed to it, rather than one that does it for show.”

The benefits of flexible working can be big: in June 2014 Deloitte introduced its “agile working” programme, allowing UK employees to decide where and when they’d work. It recently said that savings on office space and the cost of training employees to replace those who left due to inflexible working conditions have since totalled £200m ($258m).

Much has been made of the benefits of a four-day week, which UK science research foundation The Wellcome Trust is considering trialling this year. A smaller trial carried out in New Zealand in 2018 found that staff stress could be lowered by lopping a day off the working week without sacrificing the quality or output of work, while 12% of respondents to a 2018 SHRM survey said they offered a four-day week.

Corporate wellness is too often equated with “soft” perks like meditation rooms, on-site masseurs and haircuts to keep you looking your best. While these can be important, experts say they’re nowhere near as important as making sure your workforce is physically healthy.

Cartwright once conducted an experiment in a UK government department comparing the efficacy of a workforce exercise programme, stress management education and cognitive therapy. “Exercise produced more immediate and long-lasting benefits compared to the other two,” she says.

Those findings may help explain why 38% of employers report that they’re organising company-wide fitness competitions or challenges that workers are encouraged to join. The preponderance of consumer-directed healthcare plans has also grown by 10% in the past five years.

Good health doesn’t just mean healthcare cover, though. The companies that offer gym memberships to their employees believe that a healthy worker is a happy one. “Employers over the last decade or so have become more interested in and committed to wellness,” says Goulden. In part that’s down to employee demand – it’s seen as a baseline offering, rather than something nice to have.

But workers’ health can also benefit when the company strives to offer a decent work-life balance. That can be done through small measures, like subsidising fitness classes away from the workplace – which has trebled according to SHRM data in the past five years.

Allowing people to create space in their daily schedule for exercise can also help. “Giving people gym memberships and saying: ‘We think you should go two or three lunchtimes a week’ is a good idea,” says Cooper – not just because that person will keep fit, but because they’ll be out of the office.

And it’s not just fitness – doing something as simple as restricting access to emails at weekends can reduce emotional exhaustion and improve job performance, as well as reducing instances of cardiovascular conditions and musculoskeletal pain.

A happy, healthy workforce is more likely to stick around.

Is this the best time to be productive?