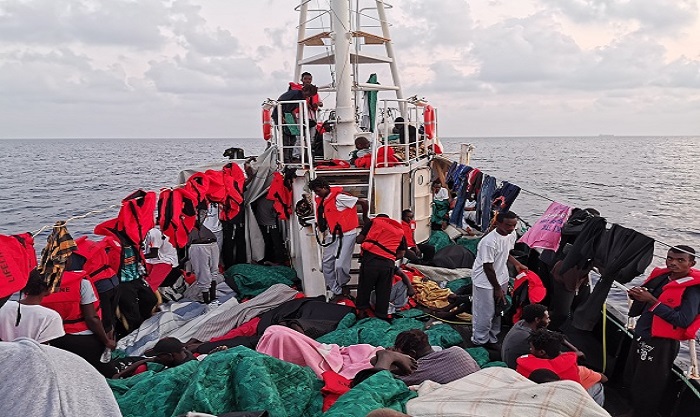 31 August 2019, ---: Around 100 migrants stand and lie tightly packed on deck of the rescue ship "Eleonore" in the early hours of the morning. The "Eleonore" took in the migrants on 26.08.2019 off the Libyan coast. The people were rescued while their boat was sinking, said Axel Steier, spokesman for the Dresden aid organisation Mission Lifeline, which supports the "Eleonore". The ship continues to search for a safe haven. Photo: Johannes Filous/dpa (Photo by Johannes Filous/picture alliance via Getty Images)

A Sudanese migrant died during his attempt to escape one of Malta’s detention centres, the Maltese police said on Wednesday.

The police said in a statement that the migrant died after he fell off a fence and hit his head while trying to escape the Hal Far detention center.

The incident happened at 5 a.m. local time (0300 GMT). He was given first aid by nurses on duty at the center and later rushed to hospital where he died of injuries.

A police investigation is underway while a magistrate has launched an inquiry into the incident.

Migrants are taken to detention centers upon their arrival on the island, where they remain until their asylum applications are processed.

US Open 2020: Johanna Konta beaten by Sorana Cirstea in second round