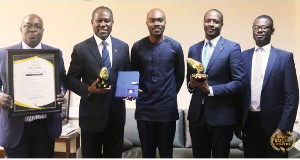 Over 30 award categories are up for grabs as nominations open till 16th October 2020 for the 2nd Ghana Cocoa Awards, an industry scheme that recognizes and celebrates excellence.

Ghana Cocoa Awards was instituted to shine the limelight on personalities and success stories in the country’s cocoa industry.

Under the theme The Africa Continental Free Trade Area – Prospects and Opportunities for Africa’s Cocoa, the awards will honour the true heroes behind Ghana’s economic backbone.

Last year, 30 organisations and individuals were rewarded in competitive categories, whereas seven distinguished personalities were singled out for honorary recognition for their contribution to the sector.

Founder and Event Director, Mr Kojo Hayford said, “2020 has been a particularly difficult year globally as the world continues to battle the COVID19 pandemic. But at the same time, the concerted response of the cocoa industry in Ghana and the sheer resilience demonstrated, we believe, is worth celebrating.”

He added, “that is why the Advisory and Awarding Board chaired by global cocoa and chocolate industry scholar, Professor Emmanuel Ohene Afoakwa, has endorsed for us to honor five organisations that stood out in the COVID19 response effort with the COVID19 Hero Honorary Award.”

Aside from the five, there are over thirty other competitive and honorary award categories open to all personalities, companies and organisations in various sections of the cocoa value chain.

Others are Company, CEO and Entrepreneur of the year categories, Brands of the year, Cocoa Financing institution, Export Promotion, Lifetime Achievement and Woman of Excellence award categories.

According to Mr Kojo Hayford, “honouring the hardworking and true heroes of Ghana’s economic backbone is very relevant in appreciating their contribution to the economy and national development, and to spur them on for even greater achievements.”

The founder of the cocoa industry awards scheme was full of praise for the sector regulator, Ghana Cocoa Board, for striving to maintain the production of premium quality cocoa beans for which Ghana is celebrated all over the world.

Cocoa, Ghana’s leading cash crop, contributes some US$2 billion annually to the economy of Ghana and this is made possible by the combined effort of our respected cocoa farmers and a complex chain of hardworking non-farming actors.

Ghana Cocoa Awards 2020 is scheduled for Saturday 14th November at the Kempinski Hotel Gold Coast City, Accra to recognise excellence in the cocoa industry while serving as a platform for networking and creating visibility for outstanding leadership and success stories.

The historic maiden edition of Ghana Cocoa Awards came off in November 2019 at the Movenpick Ambassador Hotel.

Other recipients included a former president of Ghana, H.E. John Agyekum Kufuor for the Lifetime Achievement Honorary Award, Mrs Yaa Peprah Amekudzi of Cocoa Life Ghana (Mondelez International) winner of the Sustainability Personality of the year, Managing Director of Niche Cocoa Industry Ltd Mr Edmund Poku, winner of the Cocoa Entrepreneur of the year, and Mr Justice Baidoo of Joy News, the journalist of the year.

Nominations for the 2nd Ghana Cocoa Awards are open till 16th October 2020 and entries may be submitted on the official event website – www.GhanaCocoaAwards.com/nominate.