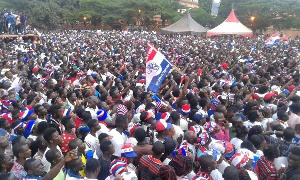 A Senior Lecturer at the Political Science Department of the University of Ghana, Dr Asah Asante, says it will be difficult for the New Patriotic Party (NPP) to snatch the three parliamentary seats held by the National Democratic Congress (NDC) in the Ashanti Region.

This comes after the ruling party vowed to win all 47 seats in the Region.

Dr Asah Asante, who was speaking on 3FM’s Decision 2020 hosted by Stephen Anti, said the dynamics have changed and that the NPP being tagged an Akan Party can still not win the remaining seats in the
region.

The NPP, which outdoored all of its Parliamentary Candidates in the region on Sunday, September 27, is claiming to have done a lot of work to deserve a reward by the electorates.

The event fielded its parliamentary candidates in the three constituencies that are currently held by the NDC, namely Asawase, Sekyere Afram Plains and Ejura Constituency.

According to the NPP, it is targeting 90 percent of the votes cast in the region and is putting all of its resources together to snatch the seats.

The NDC was already in the seat in Sekyere Afram Plains and Asawase and it added yet another seat – Ejura.

However, according to the Political Science expert, his research shows the NDC is losing grounds in the Volta and Ashanti regions with their votes margin having reduced over the period .

“It will be difficult for the NPP to win all seats but the NDC is also losing grounds,” Dr Asante said.

“Research has shown that the NPP has doubled their votes. The highest NDC can go in Ashanti Region is usually 770,000 votes,” he stated .

In the 2016 elections, the NPP won over 76 percent of the votes cast in the region but this time it is sure of winning 90 percent of votes.

The NDC, on the other, hand targeted one million votes but fell short of that.