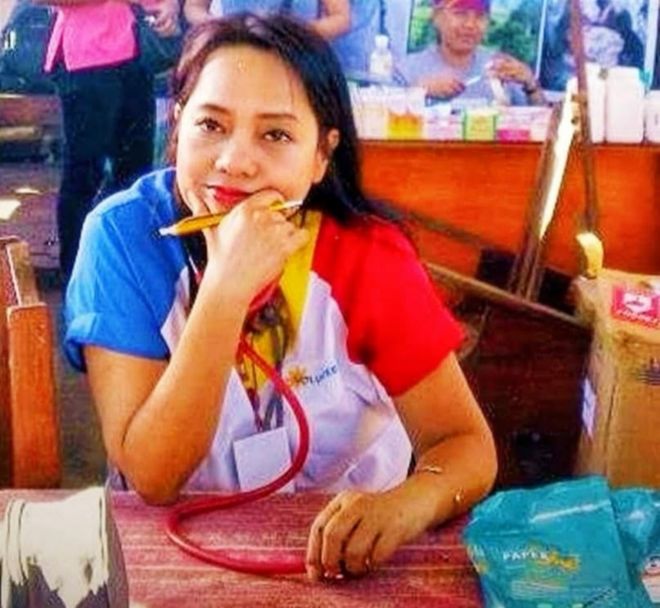 Dr Jean Lindo was on a ward round when a friend messaged to say her face was on a “wanted” poster plastered outside a local church.

The flyer branded her and eight other Filipinos including a bishop and school director – all known for their humanitarian work – as “human rights violators” and “executioners”.

It was crude and bore no signatories. But Dr Lindo, who also leads a women’s group and environmental coalition, knew the consequences could be fatal in the Philippines where public vilification has been linked to extrajudicial killings. Image copyright Photo courtesy of Karapatan Image caption A “wanted” poster fixed onto a church gate in Davao City in August

It remains unclear who was behind the poster. But those pictured point to the rise of “red-tagging” – a well-documented tactic used by successive Philippine governments, security forces and at times their anonymous backers to label individuals, without evidence, as communists or terrorists.

They warn the ambit of red-tagging is growing under the administration of President Rodrigo Duterte, who openly expresses his disdain for human rights, to criminalise dissent at large.

And now under a controversial new anti-terrorism law, which has greatly expanded the definition of terrorism, activists say their work is being targeted as even the mildest state critics can be labelled criminals.

“I’m aware I’ve been under (state) surveillance for some time,” Dr Lindo told the BBC, explaining that her work as a doctor in conflict zones had triggered official scrutiny in the past. But she was “aghast” to be “marked as a target”, she said.

The anaesthetist said the common denominator connecting those on the posters, spotted in several parts of Davao City in August, was their work with underserved indigenous communities.

For decades, Lumad people in the southern Philippines have been caught in the crossfire between the military and communist rebels in Asia’s longest-running insurgency. Authorities have often accused the Lumad of aiding the rebellion. In 2017, President Duterte even threatened to bomb tribal schools, claiming they were raising rebels, in remarks that were widely condemned.

But rights experts say they vastly overstate the connection of indigenous people to the outlawed New People’s Army, the armed wing of the Communist Party of the Philippines.

Instead, they point to the abuses recorded by a marginalised population who concurrently face threats to their ancestral lands from mining firms tapping the region – along with the activists who defend them.

In 2018, the Philippines was ranked as the deadliest country for environmental defenders by the watchdog Global Witness. Image copyright Getty Images Image caption A protest by Lumad groups in Manila calling for a probe into human rights violations in 2016

The vilification has had a “chilling effect”, said Jay Apiag, from the human rights organisation Karapatan, speaking from Davao.

He was seen on the same posters as Dr Lindo – targeted for a second time in a month. An earlier wave of flyers in July labelled him and other left-leaning activists as “terrorist recruiters”, a more direct form of red-tagging.

Journalists and lawyers have also reported being red-tagged in recent months. And in June the UN Human Rights Office said the phenomenon of red-tagging “posed a serious threat to civil society and freedom of expression”.

The abuse can be even worse online, said Mr Apiag, who reported receiving death threats on social media after being branded a terrorist there too.

“I’ve witnessed how this red-tagging presents into assassinations,” he said.

In August, Mr Apiag’s colleague Zara Alvarez was killed after being shot six times by an unidentified assailant on her way home. Her death came hours after the funeral of Randall Echanis, head of an urban poor organisation, who was murdered at his home the previous week.

Both were named as terrorists by Mr Duterte’s government in 2018 on a list of 649 people accused of having communist links.

They were later removed from the list, which was eventually whittled down to only two names, as a court ruled most allegations were unproven. But the damage was done, harassment persisted and Ms Alvarez too found her face on a poster declaring her a terrorist.

‘A testing ground for McCarthyism‘

The government has previously defended the anti-terrorism law passed in July as necessary to counter threats in the Philippines including recent suicide bombings. It says there are safeguards for civil liberties.

The BBC approached the government for comment on this story but there was no response. No one has claimed authorship of the recent flyers. And a local military official has denied any involvement.

For activists the fear is that red-tagging is being used to intimidate them and discredit their work. In June, the justice department linked several of the organisations named in the recent posters to the ongoing communist insurgency – allegations they deny. Image copyright Karapatan Image caption The targeted activists hold up the police reports they filed over the ‘wanted’ posters

“Like earlier governments, this one is wrongly conflating the voices of left-leaning activists with armed insurgents,” said Roland Tolentino, a professor of mass communication at the University of the Philippines Diliman.

And there had been an “escalating use of red-tagging” by state and non-state actors, he said, with “a culture of impunity” over the murders of activists, similar to that in the drug war prosecuted under Mr Duterte.

The current intensification of red-tagging, which began in the Philippines in the mid-1950s, has a strong historical precedent.

The former US colony was a “testing ground” for McCarthyism, said historian Joseph Scalice from Singapore’s Nanyang Technological University, referring to the infamous anti-communist movement in the US and the use of red-tagging as a strategy to quash political opposition.

Red-tagging was “generally associated with times of political upheaval such as the present,” Dr Scalice said, “with Covid-19 and economic collapse and emerging protests against the Duterte administration”.

There have been no new ‘wanted’ posters in Davao City since August. After filing a police report, informing the national human rights body and tearing down each poster they encountered, the activists resumed their work, determined not to be cowed.

“We have seen attacks far worse than this,” said Meggie Nolasco, the executive director of a local Lumad school, who was also labelled. But the latest vilification campaign showed that “everyone should be vigilant” under the new anti-terrorism law, Ms Nolasco said.

“Everyone should be alarmed, because no one is exempt from being targeted.”

China ramps up a war of words, warning the US of its red lines