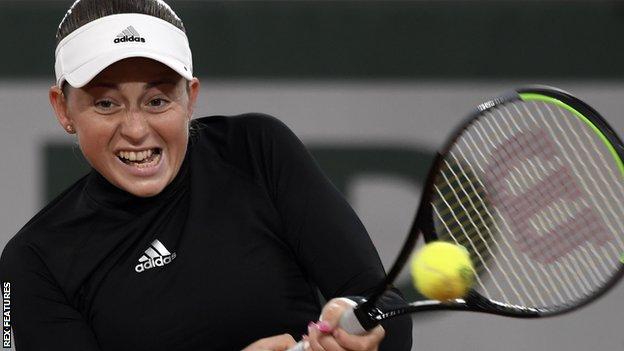 Second seed Karolina Pliskova has been beaten in the second round by Jelena Ostapenko, who produced a display reminiscent of that which won her the 2017 title in Paris.

Czech Pliskova, 28, was overwhelmed by the ferocious returns of her Latvian opponent, who had been knocked out in the first round the past two years.

Ostapenko made a crucial break in the seventh game of the opening set.

Ostapenko’s form dipped dramatically after her victory over Simona Halep at Roland Garros in 2017. She has failed to make it past the third round of a Grand Slam since, bar a quarter-final and semi-final appearance at Wimbledon.

The Latvian has pointed to injuries, as well as issues with the psychological side of her game

while she has also changed coaches during this period. She had employed 2013 Wimbledon champion Marion Bartoli, but now has Halep’s former coach Thomas Hogstedt in her camp.

Ostapenko, who has only dropped nine games on her way to the 32, said: “In the beginning it was tough because she was serving well.

“I had to serve well and be aggressive. I needed to produce great tennis to beat her.

“I’m grateful to play here and on this court [Philippe Chatrier]. I have great memories.”

Ostapenko will play Spain’s Paula Badosa after she recorded a shock 6-4 4-6 6-2 win over American 29th seed Sloane Stephens, who was a finalist in 2018.

There were no such problems for another Czech player, Petra Kvitova, as the seventh seed saw off Jasmine Paolini of Italy 6-3 6-3.

The Australian Open champion made 16 unforced errors in the opening set but only 19 in the rest of the match as she booked a third-round match against either Romania’s Irina Bara or Belgian Alison van Uytvanck.

The Scottish Open, but not as we know it as fans miss out

How Filipino activists ended up on a ‘wanted’ poster