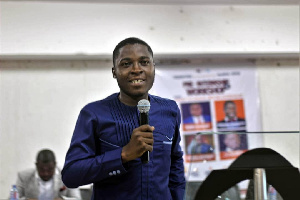 Speaking at a youth forum organized by the NDC constituency youth wing in Bantama in the Ashanti Region on Sunday evening, Edem Agbana explained the various job creation models in the NDC manifesto and urged the youth to have confidence that the next NDC administration will radically deal with the problem of unemployment.

He bemoaned how the Nana Addo Dankwa Akufo Addo government takes pride in touting temporal and low-paying jobs as the solution to the problem of unemployment. He said the youth of Ghana deserves better as he gave details of the party’s promise to create one million sustainable jobs within four years when the NDC is voted to power.

On his part, the Ashanti Regional Youth Organizer of the party, Osman Nabali described the NPP as desperate losers whose only hope is to rig the elections.

Nabali however asked the party’s youth to be vigilant and take the destiny of this country into their hands by protecting the ballot on election day.

The programme which attracted more than 300 youth in Bantama saw the likes of Dr. Hanna Bisiw, Brogya Genfi, Alex Mould, Ken Adjei, and other party bigwigs in attendance.