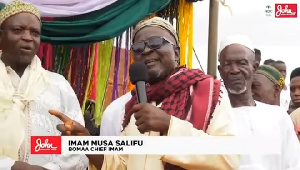 The Chief Imam for Bomaa in the Ahafo region, Imam Musah Salifu, has hit back at critics mocking a promise by the National Democratic Congress (NDC) to build separate mortuaries for Muslim communities.

The renowned Muslim Cleric said the NDC accepted their inputs into their 2020 manifesto, stressing that traditional mortuaries for them were one of the numerous requests they made to the opposition party when they travelled across the country to take inputs from stakeholders ahead for their manifesto.

According to Imam Salifu, the building of mortuaries for Muslims is a necessity and that they are grateful to the NDC for accepting to build them when voted into power, saying “…we requested for the mortuaries, so if someone is mocking or twisting the decision [of the NDC to build mortuaries for us in the zongos] he or she should know that we, Imams Association, asked the NDC to put that in their manifesto.”

Imam Salifu made this known at a durbar when the NDC flagbearer, Mr. John Dramani Mahama, called on the Chiefs and people of Techire as part of the NDC leader’s tour of the region.

He continued, “We (the Imams) converged for a meeting and decided that we need mortuaries for zongos. This is because we Muslims don’t joke with our dead bodies. Anybody at all can’t touch our dead bodies, so we told him (John Mahama) that when he’s voted into power, he should ensure we the Muslims get our own mortuaries for a decent transition.”

The Bomaa Chief Imam explained that Muslims “don’t preserve our dead ones for two or three months but we need to treat our dead ones with dignity and that should be done by ourselves before they’re buried. That is what is done in Saudi [Arabia].”

This comes after the communicators of the ruling NPP mocked the decision and said that the NDc had exhausted ideas to develop Zongos.

In a reaction, spokesperson for the NDC 2020 campaign, James Agyenim-Boateng, two weeks ago indicated that the promise had been deliberately distorted by the NPP.

“For the avoidance of doubt, the said publication is mischievous, deliberately distorted and calculated to whip up anti-Muslim sentiments against the NDC,” he said in a statement.

He said the NDC had many interventions aimed at addressing the historical inequalities between Zongo, Deprived Urban Settlements, and other communities including addressing the concerns of Muslims about how traditional mortuaries handle their beloved ones when they pass on.

You got it all wrong! – Maurice Ampaw tells Mac Manu