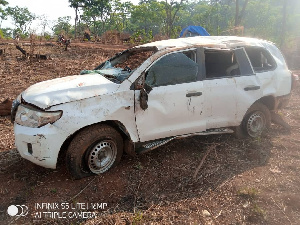 Tanzanian opposition lawmaker, Zitto Kabwe, was on Tuesday involved in a road accident while on the campaign trail in Kigoma, north-western of the country.

The MP has tweeted that he is admitted at Maweni hospital together with other party officials.

His ACT Wazalendo party has also tweeted pictures of the accident scene:

Mr Kabwe had in February received death threats after he asked the World Bank to withhold a loan to the government over human rights concerns.

A ruling party MP called for him to be killed for his letter to the World Bank.

Tanzania’s general election will be held on 28 October.