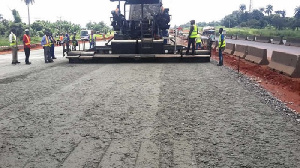 The MCE for Okaikwei North Nii Boi Laryea has admitted it is impossible for the New Patriotic Party (NPP) led government to fix all roads in the first term.

He says fixing roads in the country takes time and this administration is committed to fixing all deplorable roads in due time.

He was responding to a question on road projects his assembly has benefited from under the year of roads initiative.

He assured residents in the assembly that some road projects were ongoing and more will follow.

The New Patriotic Party (NPP) in its 2016 campaign gave a promise that they will fix roads in the country.

However, the MCE told Kwabena Agyapong on Eboboba on Rainbow Radio 87.5Fm that, the government cannot fix all roads at times hence Ghanaians especially those in his constituency should exercise patience as the Nana Addo Dankwa Akufo-Addo-led administration is working effortlessly to repair poor roads in the area.

“The poor roads we see were not destroyed today, they have been in a deplorable state for several years and so we cannot repair all of them at a go but we are in the process of repairing them. I am sure we will repair several more before the year ends. There are areas without asphalt, we will do a lot of roads by the end of the year.”