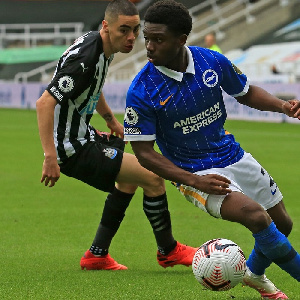 The right-back has established himself as a mainstay within Potter’s side, despite having only made the move to the seaside club from Chelsea for £4 million in January.

“I’ve always said he’s a great down-to-earth lad, so credit to him and his family,” Potter said.

“A lot of the interpersonal qualities he’s got in terms of just wanting to help the team and wants to learn wants to improve, are good.”

“He’s just a really coachable young guy. He’s obviously got a long way to go in his career, but we’re excited for him and at the same time we have to understand that he’s not played a lot of games, he’s only young, his demand physically in terms of how he plays is huge.”

“So we have to be careful with him as well. But we’re delighted with him.”

“He’s not your average kind of 20-year-old, I think. I think he just understands and really respects, and has just got an incredible amount of humility that he knows how fortunate he is, he knows what an opportunity he has in life, loves football, loves to play football, wants to do the best he can for his family and for himself and for the team.”

Lamptey has netted and assisted one in 7 matches this season.