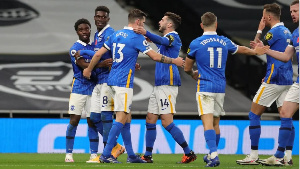 Ghanaian defender, Tariq Lamptey opened his goalscoring account for Brighton but it was not enough as Gareth Bale’s late header secured victory for Tottenham Hotspurs.

Tottenham went up 1-0 after just 13 minutes on the clock thanks to captain Harry Kane.

Despite dominating the close stages of the half, Brighton failed to level the scoreline.

Graham Potter’s team came back from the break with some determination and deservedly got their equalizer through Tariq Lamptey in the 56th minute.

But Spurs snatched the vital win in the 73rd minute after Gareth Bale ghosted his marker to head home from close range.

It was Bale’s first goal in seven years for the North London side.

Lamptey was replaced with Argentine midfielder Alexis Mac Allister in the 79th minute.

The full-back has scored 1 goal and registered 1 assist in 7 matches for the Seagulls.

He joined the club from Chelsea during the January transfer window