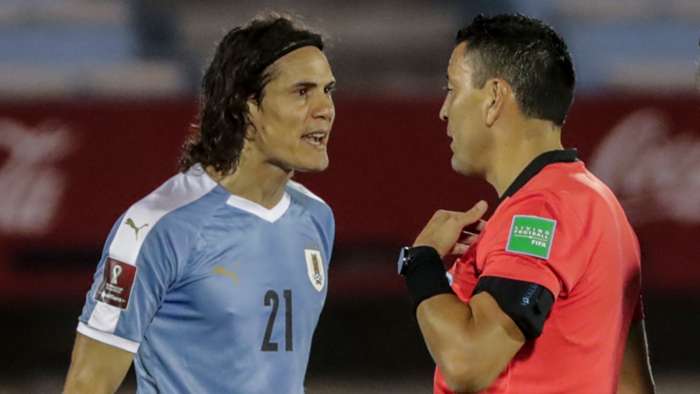 The striker made a questionable tackle on his Samba opponent, with the referee using technology to give the veteran his matching orders

Manchester United star Edinson Cavani has been sent off while on international duty for Uruguay after making a dangerous challenge on Brazil and Everton striker Richarlison.

The 33-year-old was shown the straight red mid-way through the second half as the 10-man Uruguayans crashed to a 2-0 defeat at home against the Selecao on Tuesday.

Cavani attempted to make a challenge as Richarlison powered away with the ball but only managed to catch his opponent’s shins with his studs in a reckless and dangerous manner.

After being alerted to the incident by VAR, the referee deliberated in front of the pitch-side screen before returning to the field of play to show Cavani the red card.

The two-goal defeat leaves the Uruguayans positioned in fifth on the CONMEBOL World Cup qualifying table after five matches, with the top four achieving automatic qualification for Qatar 2022 and fifth place earning a playoff.

With each team playing 18 matches, Uruguay made the best possible start to their qualification with a 2-1 win against Chile last month, however they disappointed in a 4-2 defeat versus Ecuador shortly after.

Heading into the Brazil match, it appeared the Uruguayans were in top form as they crushed Colombia 3-0 on the road, but they were unable to deal with the early brilliance from the Samba stars.

Despite missing Neymar through injury, Brazil earned a 34th minute lead through Juventus’ Arthur, before Richarlison’s goal on the stroke of half time gave them some crucial breathing space.

Uruguay worked hard to get back in the match during the second-half, but their task was made harder by the 71st-minute dismissal of Cavani and they failed to record a shot on target for the entire 90 minutes.

Cavani, who joined Manchester United at the end of the transfer window, was making his second start for his nation during the international window – after scoring the opening goal against Ecuador.

The ex-PSG striker has been slowly working his way back to match fitness at Old Trafford, and scored his first goal in the 3-1 win against Everton just prior to the international break.