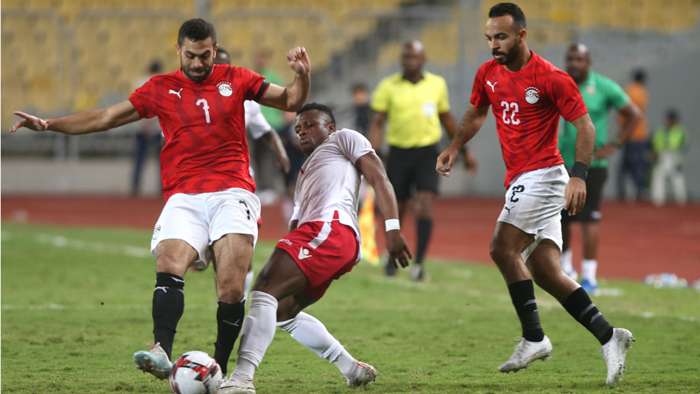 Egypt put the absence of Liverpool forward Mohamed Salah and Arsenal’s Mohamed Elneny behind them to beat Togo 3-1 away in Lome to maintain top spot in Group G the 2022 Africa Cup of Nations qualifiers.

Goals from Mohamed Kafsha, Mohamed Sherif and Aston Villa midfielder Mahmoud ‘Trezeguet’ Hassan saw the Pharaohs get past Togo, who got their injury-time consolation goal from Elom Nya-Vedji.

The result saw Egypt remaining at the top of Group G with eight points, the same as Comoro Islands. who beat Kenya 2-1 on Sunday.

But the North Africans are top of the group due to a draw they claimed away in the Comoros.

With Egypt travelling to Lome without Salah and Elneny, who both tested positive for coronavirus, the Pharaohs appeared depleted but they turned the tide against Togo, who anchor the group without a win after four games.

It was a second consecutive victory for Egypt who edged Togo 1-0 in the reverse fixture in Cairo on Saturday.

It was a third consecutive victory for the Atlas Lions who went ahead through Chelsea midfielder Hakim Ziyech, before Sevilla forward Youssef En-Nesyri sealed victory for Morocco.

Ziyech had a big say in the contest as he also provided an assist for En-Nesyri to complete this international period in which Morocco won 4-1 at home with Ziyech grabbing a brace, on a high.

The Atlas Lions now have 10 points in this group, followed by Mauritania who are ion five points.

In Group K, Madagascar maintained course to qualify for the 2022 Afcon after coming from behind to earn a 1-1 draw against leaders Ivory Coast at Barikadimy Stadium in Toamasina on Tuesday.

AC Milan midfielder Franck Kessie opened the scoring for Ivory Coast from the penalty spot 15 minutes into the match before Ibrahim Amada levelled for Madagascar six minutes into the second half.

Tied on seven points each, Ivory Coast lead the standings courtesy of head-to-head record after beating the Indian Ocean islanders 2-1 in the reverse fixture last Thursday.