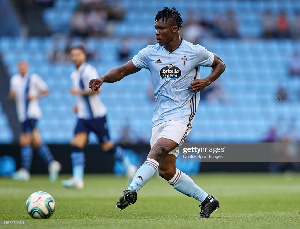 Ghana defender Joseph Aidoo has tested negative for COVID-19 after a 14-day quarantine to feature for Celta Vigo as they suffered defeat to La Liga leaders Real Sociedad.

Aidoo replaced Nestor Araujo in the 46th minute as he made his first appearance since returning from the international break.

Celta Vigo was down by two goals after former Manchester City captain David Silva and Mikel Oyarzabal had scored before the former Inter Allies player came on.

Willian Jose extended Real Sociedad’s lead in the 54th minute before Iago Aspas pulled one back from the spot.

Jose added a fourth with nine minutes left as Sociedad leapfrog Real Madrid to top of the table.

Joseph Aidoo has however been named in Ghana coach C.K AKonnor’s team for the AFCON qualifiers against Sudan next month.