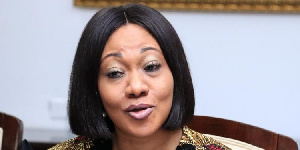 Member of Parliament for the Asawase Constituency, Mohammed Mubarak Muntaka has questioned the whereabouts of the Electoral Commissioner, Jean Mensa.

Jean Mensa was supposed to appear before parliament to brief the House on the EC’s preparedness ahead of the December polls.

As at the time of filing this report, the EC chair had not shown up in parliament as expected, GhanaWeb can confirm.

This, the Asawase MP said was uncalled for, describing her absence as running over the House.

Muntaka further noted that this isn’t the first Jean Mensa has swerved them as it has happened on several occasions.

He, therefore, requested that she be summoned before parliament.

Addressing this on the floor of parliament Thursday, November 5, 2020, Muntaka said “…please, we are allowing her to run over us, that is not fair. We need to be told where she is. She cannot refuse to appear before us and she must be summoned.

“She has consistently avoided this house. It is not fair that we will allow this to continue, Mr Chair…she has to be summoned to be

l’ll make a better President in my second coming – Mahama