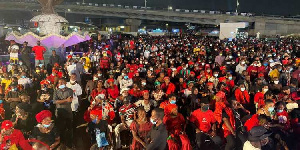 A huge crowd of mourners believed to be sympathizers of the opposition National Democratic Congress (NDC) Sunday evening thronged the Obra Spot at Kwame Nkrumah Circle to keep vigil in honour of the late founder of the party, Jerry John Rawlings.

The first president of the Fourth Republic and the founder of the NDC, Jerry John Rawlings died Thursday, November 12 at the Korle-Bu Teaching Hospital after a short illness.

President Akufo-Addo has declared 7-day national mourning and directed all flags to fly at half-mast while the government together with the bereaved family plans a state burial for the deceased former president.

The NDC has however started a series of activities in honour of their founder, one of which is the vigil held at the Obra Spot.

In attendance was the presidential candidate of the party, John Dramani Mahama, second deputy Speaker of Parliament, Alban Bagbin, the Minority Leader of Parliament, Haruna Iddirisu, General Secretary of the NDC, Johnson Asiedu Nketiah, the family of the late J.J Rawlings represented by Zanetor and Kimathi among other leading members of the party and sympathizers.