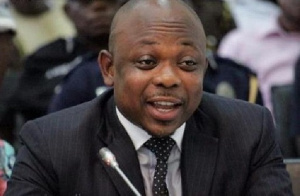 Ranking member of Parliament’s Defense and Interior Committee, James Agalga has asked government and security agencies to be more proactive in managing intelligence gathered in relation to emerging issues in the country.

His comments follow the recent revolt attempts by some secessionist groups in parts of the Volta Region.

James Agalga, speaking on the floor of parliament on the recent Volta attacks on November 5, 2020, argued that even though the government claimed to have gathered intelligence on the recent attacks in the Volta Region, they failed to act swiftly.

“Mr. Speaker the point I’d like to make is that the government’s own position that it had intelligence on the subject prior to the attack could have resulted in a more proactive way on the part of our security agency in foiling the attack,” he said.

He continued, “But Mr Speaker the attack that was launched was very brazen…I think that moving forward, we should be more proactive when intelligence is gathered…”

Even though some arrests have been made so far in this regard, Mr Agalga maintains that “we could be more proactive in ruling up preventive measures the next time we gather intelligence on the activities of those groups.

Members of Volta secessionist groups attacked some towns in the Volta Region in September; mounting roadblocks on some key routes in the region and firing gunshots in the process.

The attack also led to the invasion of about two police stations and an STC bus terminal.

But the government, through the Information Minister Kojo Oppong Nkrumah said they had intelligence on the activities of the group.

The Information Minister is quoted to have said during a press briefing “I can tell you a matter of fact that no, there was an intelligence failure. Indeed, the direst aspects of what the intelligence suggested these persons wanted to do were contained by the security agencies.”

No one should be deprived of telephony services – Ursula