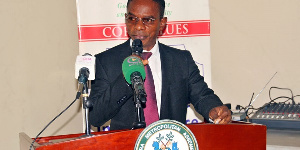 He said the Office of the Auditor-General had noticed that some heads of SOEs had developed financial reports audited by their own audit firms, with the excuse that the firms were chosen by their development partners, which he vehemently stressed, was against the law.

The PFM Act regulates the financial management of the public sector within a macroeconomic and fiscal framework, underpinned with stronger cash management, spending execution and budget monitoring.

The Acting Auditor-General said this on Wednesday, the second day of this year’s Policy and Governance Forum on the theme: “State Interest and Governance Authority (SIGA): One Year on; Achievements, Challenges and Prospects”.

Clause 2 of Article 187 of the 1992 Constitution mandated the Auditor General to audit and report on the accounts of all public instituitions in the country.

Speaking on the topic, “Ensuring Accountability and Transparency in Specified Entities,” he reminded heads of SOEs that they were entrusted with state assets, and it was imperative for them to manage those resources in a diligent and transparent manner because they would account for their stewardship.

He advised audit firms to start their interim auditing by January and submit it to the Auditor-General by April to be submitted to Parliament by end June for the necessary actions.

He expressed concern about the undue delays by some state institutions in releasing their financial statements to the Auditor-General, urging such organisations to do well to submit their reports on time to avoid unnecessary pressure.

Mr Asiedu said some of the auditing firms had taken on so many assignments and projects, contributing immensely to such delays.

“Public institutions must operate within the rules of transparency and accountability to build the confidence of the public. They must ensure good governance in all transactions and disclose information to authorities,” he said.