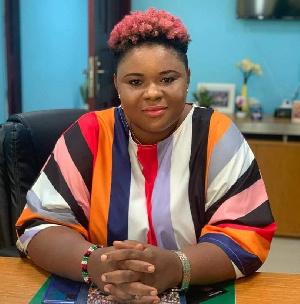 The Deputy National Youth Organiser for the National Democratic Congress (NDC), Ruth Dela Seddoh, says a win for Kamala Harris in the United States of America sets women on higher ground to conquer the world.

According to her, the United States of America like Ghana has one of its leading political parties selecting a Vice Presidential Candidate in the person of Prof. Jane Naana Opoku Agyemang who needs to be provided with the needed backing like Kamala Harris of the United States.

She said with the support and win for Jane, the minority in the society will be well represented in order to ensure that the society is balanced.

“I call on all women in Ghana to emulate the US example and give Prof. Naana the opportunity to represent the interests, aspirations and voices of women at the highest decision making table in Ghana.”


Read the statement below:

WE CAN ACCOMPLISH IN 63 YEARS WHAT IT HAS TAKEN AMERICANS OVER 200 YEARS TO ACCOMPLISH – KAMALA DEVI HARRIS’ VICTORY IS A CALL TO WOMEN TO THE DECISION TABLE.

United States of America, a citadel of democracy, has taken a giant step forward in electing the first woman Vice President in its democratic history.

Born in 1964, the California Senator, is the first Indian American to have served as a senator, and the second African American woman for that matter. Kamala rose to this height through hard work and determination. As a black American woman, her achievement is call to all women that with determination and hard work, nothing is bigger to achieve.

A lawyer who served as a state Attorney General between 2011 and 2017, Kamala distinguished herself as one of the impartial and independent-minded judge. This was among other reasons why her call to partner Joe Biden proved to be the best ticket in the history of the United States.

The win for Kamala Devi Harris has indeed set the pace for womanhood around the world. Given the geopolitics and the position of the US in world politics, a woman as number two is such a good opportunity for the voices of women to be heard. It is time for women to take a chance at the high table of decision making and represent our voices and the voices of other marginalized groups in leadership.

This victory indeed gives a direction to Africa and Ghana in particular. The NDC in Ghana, which has ideological inclinations as the Democrats in the US, has also nominated a woman as our Vice Presidential candidate. Prof. Naana Jane Opoku-Agyeman, a distinguished scholar, is just as huge as Kamala and can serve in the second highest office of the land just like Kamala.

I call on all women in Ghana to emulate the US example and give Prof. Naana the opportunity to represent the interests, aspirations and voices of women at the highest decision making table in Ghana.
Indeed, the win for Kamala Devi Harris is a win for women and a path for achieving equality and gender parity. Congratulations to Kamala Devi Harris on your election to the office of the Vice President in the United States of America.