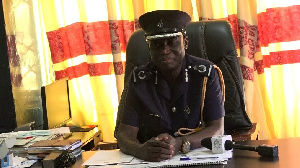 The Upper West Regional Police Commander, DCOP Francis Aboagye-Nyarko, has given his word to the transit community, to bring an immediate stop to the incidence of harassment and extortion by police officers on drivers using the transit corridor within his jurisdiction.

He made this vow, during a working visit of a GPHA team who embarked on a problem-solving mission on the transit corridor to minimise the reported harassment and extortion on the corridor.

“I assure that within my jurisdiction from today, there would be significant improvement,” he said.

DCOP Francis Aboagye-Nyarko said in addition to holding his officers more accountable, he would collaborate with the various regional commands to ensure a holistic and effective approach to end the problem of police harassment on the corridor.

He added that, he has also instituted an escort regime that is intended to provide security to transit drivers and cargoes during their use of the corridor against crime.

“So I found out and realised that because the environment is vulnerable there is a need to police them to the barrier and handover to our counterparts at the other side.”

David Songotu, the GPHA Representative to the Sahelian countries, expressed optimism that the Regional Commander’s efforts would be a successful one that would eliminate the discomfort transit drivers feel using the corridor.
He also said initiatives such as the escort regime would go a long way to woo mo