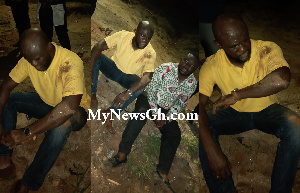 Some executives of the National Democratic Congress (NDC) in the Ashanti Region have been robbed at gunpoint, MyNewsGh.com has confirmed.

The victims including the Deputy Ashanti Regional Youth Organiser Onasis Kobby were returning from one of the communities in the Afigya-Kwabre South Constituency where they went to campaign in the when they were pounced on by the robbers who had mounted a roadblock around a valley.

According to Onasis Kobby, the team left Hemang and were heading towards Ejuratia when the gun-wielding robbers numbering about five, masked and wearing overall in order to disguise their identity, stopped their vehicles and ordered occupants to lie prostrate on the bare floor with guns pointed at them.

“They hit the Constituency Women Organiser, the Deputy Constituency Youth Organiser and the Communications Officer with the butts of the gun leaving them with severe injuries. They later ransacked the vehicles and took mobile phones, money and other valuables and bolted with the booty into the bush”, he confirmed to MyNewsGh.com.

Police it is gathered, got wind of the robbery attack and rushed to the scene but the bandits had long gone leaving their victims with various degrees of injuries.

The NPP executives were later sent to the Mamponteng Hospital where they have since been treated and discharged while the police are investigating the matter.

Gender Minister hints Affirmative Action Bill will be passed in 2021