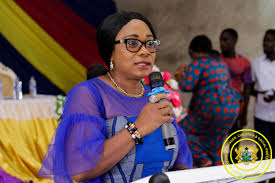 Cynthia Mamle Morrison, the Minister for Gender, Children and Social Protection has said that the Affirmative Action Bill will be passed in 2021 if President Nana Addo Dankwa Akufo-Addo wins a second term of office.

According to her, the bill cannot be passed within the first term of the NPP administration due to a last-minute request by persons with disability who are asking that equal representation provisions be included in the bill.

Morrison told Joy News: “We took it to cabinet and then my brothers and sisters with disabilities wrote to me specifically to say that they have to be part of it even though it is [about] women, they want their role so we had to add them to it and then it has to go back to cabinet and go to AG [attorney-general] for correction and then she [AG] brings it back, so it’s in the final stage.”

Morrison added that the document is currently before the Attorney General going through corrections, after which it will be delivered to cabinet, then finally to Parliament.

She added: “…..I don’t think it’s going to go before we rise so I’m sure the next cabinet, hopefully by that time we will still be in power so we’ll pass it.”