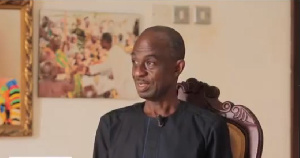 General Secretary of the NDC, Johnson Asiedu Nketia, says that the best way the party can honour the memory of Jerry John Rawlings is to win the December 7 elections.

He explained that the NDC supporters must stay true to the principles of probity and accountability which are the principles of the June 4, 1979 “Revolution” which is associated with the late Jerry John Rawlings.

“The principles of Rawlings are good, but they will be impotent if we are in opposition. So, the best tribute to President Rawlings is to be committed to the Rescue Mission. So be fired up by the temporary demise of our founder to win this election and rescue this nation Ghana which was dear to his heart from the very ills he fought against all his life. Corruption today is worse than what he fought against on the occasion of June 4th. Nepotism today is worse than what occasioned the June 4th revolution. Let us fight to come to power. Let us revisit the idea of June 4th becoming one of the national holidays. We can only do this in power,” Asiedu Nketia said at a vigil organised in memory of the late former President at Obra Spot in Accra.

He continued: “President Rawlings when he was alive, did not take pleasure in monuments being named after him. In fact, there were several occasions where he resisted the attempt to name monuments after him. His life also shows that he abhors ostentatious living and ostentatious funerals and ceremonies…He kept reminding us that the best tribute we can keep in his memory is to hold dearly the principles of June 4 based upon which the NDC was established.”

“…keep on practising what he cherished most and for my comrades in the cadre fraternity, for us to remind ourselves about the simple things he did to show that he cared for the fellow Ghanaians.”

He indicated Rawlings was a servant leader who was constantly involved with the people and throughout his lifetime, he “showed in many ways that leadership is done by example.”

“We have to dedicate one day to undertake a massive clean-up exercise in remembrance of Rawlings and route marches. I believe that if this is done, President Rawlings will be smiling wherever he is now,” Asiedu Nketia urged the NDC supporters.

Pogba: I’ve never had such a difficult period in my career