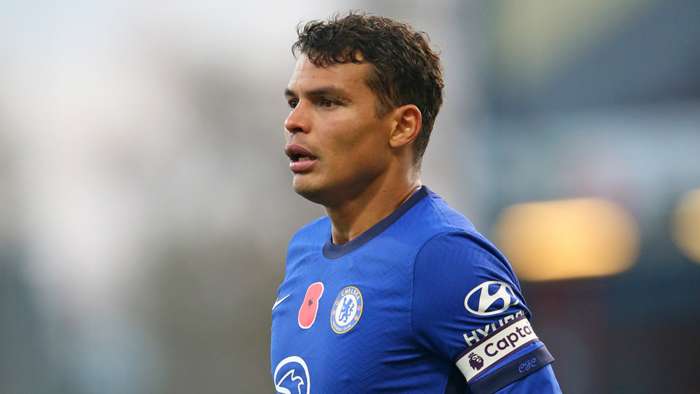 The Brazil international has taken an all-in approach to life in the Premier League, making numerous adjustments to help prolong his top-level career

The end, when it came, was acrimonious.

Thiago Silva, Paris Saint-Germain’s captain, finished as a loser in last season’s Champions League final, knowing it would be his last match for the club.

About to turn 36 and with sporting director Leonardo originally intending to reduce the average age of the squad, his time was up.

There was to be one last intervention on the part of Leonardo to try to convince his defensive leader to stay, but it proved too little, too late. Silva’s mind was made up.

Chelsea would be his destination, though there were plenty of questions over the wisdom of signing an out-of-contract defender of such an advanced age.

The Premier League is widely regarded as not only the best league in the world but the most physical, and Silva was coming from a PSG team used to dominating every match in Ligue 1.

Silva backed himself to perform and, importantly, so did Frank Lampard, who bided his time before deciding to sign the experienced defender.

Chelsea’s transfer ban gave them a long time to think about how to spend £220 million ($275m) during the off-season, with Timo Werner, Ben Chilwell, Kai Havertz and Edouard Mendy having appeared on the club’s transfer shortlists for quite a while.

Silva was more of a left-field option; he was offered to the Blues ahead of the Champions League final and signed just after it. Lampard wanted his club to be decisive amid interest from Italy.

Serie A could have been the safer option. He can speak the language having excelled in his time at AC Milan before moving to Paris.

But, after the belated offer from PSG was rebuffed, Chelsea’s was accepted.

Lampard’s side conceded 54 league goals last season – the worst total since Roman Abramovich bought the club in 2003 – and as such have pinned a lot of their hopes on the Brazil international turning around their defensive form.

The move, so far, has paid off.

Silva has been involved in six of the club’s seven clean sheets this season; a run that has seen Chelsea shoot up the table, sitting just three points behind leaders Leicester City.

The settled backline of Mendy, Reece James, Silva, Kurt Zouma and Chilwell has secured a previous weakness. And the pace at which Silva has adapted has astonished some around the club.

The veteran has taken an all-in approach to the move and has settled with his family in a mansion close to Cobham Training Centre. That building houses recovery facilities for extra work in what has already proven to be a busy season for club and country.

At times, Lampard has proven willing to pull Silva out for a rest – as he did ahead of Krasnodar away in the Champions League – and the Blues use a high-tech app to monitor the fitness of players behind the scenes.

Part of his recovery from matches is based on diet and sleep while a long-standing commitment not to smoke or drink only helps him defy his age.

“He puts a lot of emphasis on diet and exercise,” his wife Isabelle Silva told Goal. “He is very professional. Whenever he wants to achieve a goal, I do what I can; I try to eat natural like him, we don’t drink soda.

“We do the exercises together at home; he helps me too. It’s nothing extraordinary; it’s just simple things, he exercises a lot with the club. He only does light exercise when he is at home.”

His wife manages a team of staff to help him off the field, with a personal physiotherapist and performance advisor from London added on the advice of fellow Brazilians Emerson Palmieri and David Luiz.

“I have a personal team that has been with me for two years, more or less, and has managed to change my eating routine a little,” Silva said as he joined up with Brazil’s national team last week.

“I ate a lot of bullsh*t, especially post-game, sometimes even before, and we know that in high-level football you need to take care of all sides. The preparation, prevention, training, I was normal. What was not was the food part.”

There is also a translator with the group during Lampard’s training sessions to ease communication, but Silva is studying English from Monday to Friday to add to the four languages he already speaks.

His current lack of fluent English has not prevented him connecting with his team-mates, who in turn have quickly grown close to their new defensive leader.

In the Blues’ 4-1 win over Sheffield United ahead of the international break, the celebrations around Silva’s goal showed just what a loved figure he has become.

His family has taken to London life, having had days out to explore the city, while sons Iago and Isago both play in the Chelsea academy set-up.

The long-term mission for Silva is to make the Brazil World Cup squad for Qatar 2022, and right now that seems likely.

His ‘O Monstro’ moniker is deserved as the monster of mentality and physique battles to get Chelsea back to the top.