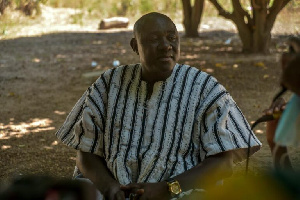 With just 22 days to election 2020, the governing NPP’s parliamentary candidate for the Builsa North Constituency Maurice James Abakisi is confident of beating incumbent MP James Agalga to annex the seat.

Speaking to journalists in Sandema over the weekend, Mr Abakisi said he will score more than the 65% his opponent is targeting in the December parliamentary polls.

According to him, “he has predicted 65% and that is for him but I am sure of getting even 100% or any score that will get me a distinction. I have lived with people all my life. Educated and worked here and the people know what we have done and how we have carried ourselves growing up here”, he stressed.

Mr. Abakisi who is hoping to be the second person from the NPP to win the seat for the second time since 2004 when Agnes Chigabatia won it for the party believes the people will vote for him based on the track record of the governing party and his personal contribution to the area.

“The government has delivered key policies such as the Free SHS, Planting for Food and Jobs, NHIS among others hence the people who are benefiting from the delivery of the government will vote for us”, he added.

Touching on what his focus will be if, given the nod in December, Mr Abakisi disclosed that provision of quality water for the people, education and job creation will be his primary focus.

The candidate was however unhappy with the campaign strategy of his opponent.

“I heard my opponent telling some people somewhere that when late Professor Mills died the NDC won the 2012 elections and now that Rawlings is dead it means they will win the 2020 elections. How can you say this? Must people die before we win elections? We must tell people what we have done and what we shall do if given the mandate”, he stressed.

What Rawlings should have done before his death – Dr. Ayensu divulges