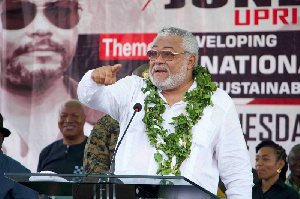 Dr Ebenezer Ayensu of the Institute of African Studies, University of Ghana has bemoaned the fact that former President Jerry John Rawlings could not fully tell his side of all allegations levelled against him before his death.

Papa J, as he is popularly called passed away on Thursday at the Korle-Bu Teaching Hospital after a short illness.

The former President has been blamed for several atrocities that reportedly took place during his regime. Some historians have indicated that some of these atrocities were not under the direct instructions of Rawlings.

Dr Ayensu speaking in an interview on Neat FM’s, ‘Me Man Nti’ programme said that the former President before his death should have indicated the ones he actually ordered and those he didn’t.

“. . a lot of things were done in his administration and he should have given his side of the story; what he actually did and which ones were fabrications or were done in his name . . . I would have been glad if he had done that before his death . . . but God knows best,” he said.