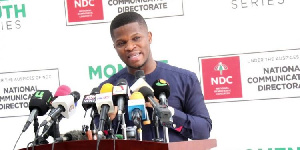 National Communications Director of the opposition National Democratic Congress, Sammy Gyamfi has reacted to the resignation of the Special Prosecutor, Mr. Martin Amidu.

According to him, President Nana Addo Dankwa Akufo-Addo whom he describes as an embodiment of corruption has fought anyone who seeks to unravel the “rot he is superintending over” since he took over from the John Dramani Mahama administration.

Sammy Gyamfi declared that the fight against corruption in the country has been lost since the one person who was appointed to lead the front lines has resigned from his post.

“We elected a President @NAkufoAddo. who is an embodiment of corruption. A President, who has fought and oppressed all critical voices who’ve dared to expose the rot he is superintending over. His cup is now full. The fight against corruption has been lost. Sad.”

Special Prosecutor, Martin Amidu resigned from his post on Monday, November 17, 2020, citing the death of former President Jerry John Rawlings and interference in his works.

“I also refused to shelve my report to enable you to handle the matter which explains my press release to the public on this morning of 24 November 2020 and the follow-up with the distribution of the full sixty-four (64) page Agyapa Royalties Transactions anti-corruption assessment report to the public, unbeknown to you that I had published the fall sixty-four (64) page report to the public you caused a press statement to be made based on my letter dated 16 October 2020 to you under reference which sought to politicize and down play the seriousness of the professional analysis of the risk of corruption and anti-corruption assessment reported by my Office,” Amidu said in the letter.