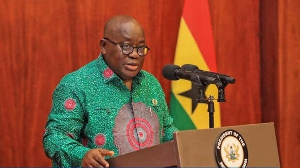 “The events of 12th November 2020 removed the only protection I had from the threats and plans directed at me for undertaking the Agyapa Royalties Limited Transactions anti-corruption assessment report and dictates that I resign as the Special Prosecutor immediately.

“I should not ordinarily be announcing my resignation to the public myself but the traumatic experience I went through from 20th October 2020 to 2nd November 2020 when I conveyed in a thirteen (13) page letter the conclusions and observations on the analysis of the risk of corruption and anti-corruption assessment on the Report On Agyapa Royalties Limited Transactions and Other Matters Related Thereto to the President as Chairman of the National Security Council caution against not bringing my resignation as the Special Prosecutor with immediate to the notice of the Ghanaian public and the world.

“The reaction I received for daring to produce the Agyapa Royalties Limited Transactions anti-corruption report convinces me beyond any reasonable doubt that I was not intended to exercise any independence as the Special Prosecutor in the prevention, investigation, prosecution, and recovery of assets of corruption. My position as the Special Prosecutor has consequently become clearly untenable.”

“One of the difficulties he had with the appointment of Mr Amidu was that he was too much of a political figure. That was not a very good decision to set up an independent institution and man it with somebody who was so political. It was always going to be a problem.”