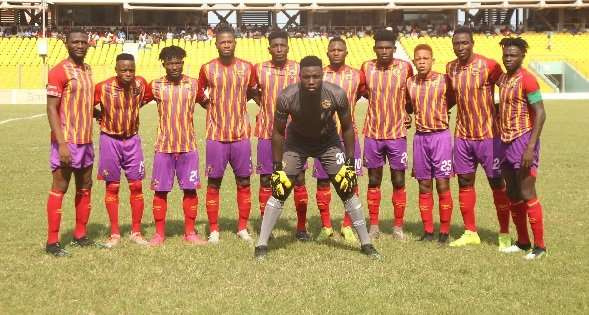 Accra Hearts of Oak have confirmed that they have received clearance from the Ghana Health Service and Ghana Football Association to return to action on Tuesday, November 24, 2020.

Hearts could not honour their first match of the season against Aduana Stars after some members of the playing body tested positive for coronavirus.

There were reports that over thirty playing and non-playing staff of the club were diagnosed with the virus during the government’s mandatory Covid-19 test.

They have however been cleared to play for football after they all tested negative in the latest round of Covid-19 tests.

Hearts in a statement said that their week 2 fixture against Ashgold will be played on Tuesday, November 24 instead of Sunday.

This, according to the club, is to allow the players coming out of quarantine prepare effectively for the match.

“The Ghana Football Association (GFA) has shifted Hearts’ matchday 2 Ghana Premier League match with AshGold SC to Tuesday, November 24, 2020, with the game scheduled to be played at the Accra Sports Stadium”.

“It was originally set to be played on Saturday, November 21 at the same venue but has had to be postponed to this new date”, parts of the statement read.

Week 2 of the 2020/2021 Ghana Premier League season will be headlined by a match between Kumasi Asante Kotoko and Berekum Chelsea.

After a disappointing 1-1 draw with Techiman Eleven Wonders, Kotoko are on the road to seek their first win of the season.

Maxwell Konadu’s side has been boosted with the arrival of Brazilian Fabio Gama.

The Brazilian arrived in the country over the weekend and had his first training session on Monday.

He is in line to feature against Berekum Chelsea in his number-10 shirted jersey.

Frank Lampard on being a manager: ‘You have to practise, fail, get better’