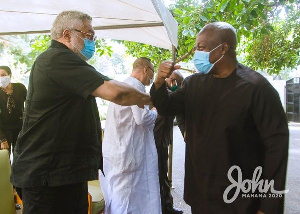 A member of the campaign team for former President John Dramani Mahama, Kobby Mensah has debunked the assertion that there was bad blood between the founder of the National Democratic Congress (NDC) Flt. Lt Jerry John Rawlings and the NDC Flagbearer.

To him, the largest opposition National Democratic Congress (NDC) has had a fruitful relationship with its founder, former President Jerry John Rawlings irrespective of the public perception of a feud going on between the leadership of the party and the party’s founder.

Speaking on Okay FM’s ‘Ade Akye Abia’ Morning Show to express his dislike of the Akufo-Addo led government hijacking the funeral arrangement of the late President JJ Rawlings, the former NDC Parliamentary Aspirant for Ningo-Prampram Constituency also said that the NDC was having a good and healthy relationship with the late President Rawlings.

He stressed that there was a solid communication between former President John Dramani Mahama and the late President Rawlings in spite of the perception out that they are not in talking terms with each other.

He stated that the NDC like any other corporate body has its Directors and investors which makes it a publicly owned entity.

He reiterated that the founder of the National Democratic Congress (NDC), Jerry John Rawlings did not establish the party to make it a bona fide property of his wife, Nana Konadu Agyemang Rawlings and her family but for the entire nation.

He, however, claimed that the late President Rawlings endorsed former President John Mahama for the presidency in the last video circulating on social media before his death to demonstrate that he has the NDC in his heart.

“The last video of Rawlings and a young girl circulating on social media indicates that the man loves the NDC; he endorsed the No.2 on the ballot and it means that the man has NDC in his heart,” he posited.

We’re disappointed in Amidu over his resignation – OccupyGhana