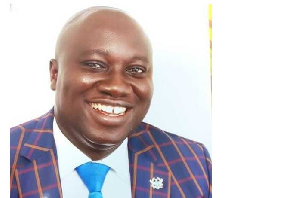 The General Secretary of the ruling New Patriotic Party (NPP) John Boadu has urged the people of Mfantseman to honor the memory of their late Member of Parliament, Ekow Quansah Hayford by voting massively for the NPP on December 7, general elections.

Speaking at the funeral of the late MP at Mankessim on Saturday, November 28, Mr. Boadu said with the great work done by the former, it is just right that the constituents vote for the NPP parliamentary candidate – Ophelia Hayford, who’s the widow of the late MP to continue with his good works.

“Ekow, having died in the line of duty and in service to your people, it is right to say that the greatest tribute that the good people of Mfantseman can pay to honour your memory is to vote massively for your replacement – The NPP’s 2020 Parliamentary candidate Madam Ophelia Hayford [widow].”

“While the NPP mourns with the good people of Mfantseman and the nation at large on the untimely death of Hon. Ekow Quansah we also once again share with Ghanaians and the bereaved family in particular our deepest condolences for the irreplaceable loss. May he continue to rest in the bosom of the Lord and may generations continue to learn from his selfless service to God and country. Rest in Peace, Ekow.”

The solemn event was attended by President Akufo-Addo, Vice President Bawumia, members of the ruling New Patriotic Party, and Ghanaians from all walks of life.

Many of the constituents are unable to hold back their tears as they mourn their beloved Member of Parliament who is described as affable and kind.

The late MP was killed by armed robbers on Friday 9th October 2020 around 1:00 am on the Abeadze Nkusukum-Duadze road while returning from campaign activities.

Heavenly Father, the battle is still yours – First Lady as she prays for Akufo-Addo