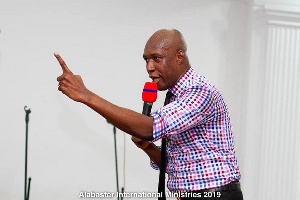 General Overseer of the Alabaster International Prayer Ministry, Prophet Kofi Oduro, has urged Ghanaians to kick out any leader who underperformed during their tenure of office.

According to him, it’s about time Ghanaians change their voting pattern and erase the ‘colonial’ mentality they have about unflinching affiliations to political party regardless of their performances.

Advising his congregation ahead of the December polls, the man of God said “The days of my father is party A, party B is over, the days of I belong to that party and therefore I need to vote is over. The days have now come where I belong to a particular party but I will vote against them. That time has come. This is not a joke and we have come to the place to make a decision.”

He stated that whether Ghanaians have witnessed developmental projects in their various localities or not, they have to come out on December 7 to exercise their franchise.

Prophet Oduro also sought to remind them that it is their civic duty to cast their votes to reflect a God-fearing leader and not one who will ruin the country with autocratic dictates.

On Monday, December 7, Ghanaians will go to the polls to elect a president and parliamentary candidates to rule the country for the next 4 years.