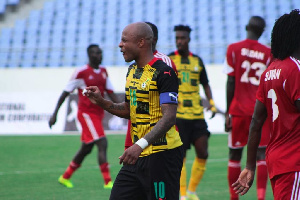 Black Stars Captain, Andre Dede Ayew’s free-kick goal against Sudan has been nominated by the Confederation of African Football (CAF) for best goals scored in matchday three and four of the 2021 Africa Cup of Nations qualifiers.

The Swansea City star scored a brace in the game for the Black Stars as they secured a 2-0 win over Sudan at the Cape Coast Sports Stadium.

The 30-year old missed the return league in Omdurman after picking an injury in training.

The African champions held Zimbabwe to a 2-2 draw at their own backyard.

GFA should allow clubs to record their matches – Bechem CEO