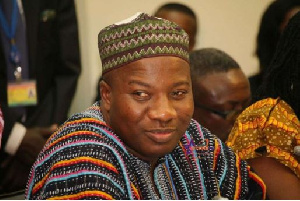 Mahama Ayariga, the Member of Parliament for Bawku Central has asked to be left out of any discussion regarding the resignation of Martin Amidu as Special Prosecutor.

Ayariga is one of the many public figures who clashed with Amidu during his time as Special Prosecutor.

The two persons who are known to share close ties had media confrontations when Amidu charged Ayariga for abusing his office for personal gain.

Amidu also accused Ayariga of tax evasion in the clearance of vehicles and illegal transfer of foreign exchange from Ghana to Dubai, UAE, without having the required licence for such a transaction.

Following Amidu’s resignation, Ayariga says he has been receiving calls and messages from people who intend to know his position on the matter.

He has however declined those requests and is focused on winning the case brought against him by the Special Prosecutor.

Ayariga said that the resignation of Amidu does not in any affect his case the Accra High Court.

“Since this matter of my uncle I have been called by many radio stations to discuss this matter in one form or the other. I don’t know why people think I should speak on it but I don’t have a special interest in his resignation. His resignation has not affected my stand in my case. The case doesn’t stop because my uncle has resigned. I don’t have any interest in the resignation and focus on his reasons for resigning”.

Ayariga also disclosed that, during the vetting of Amidu, the Minority MPs were urged by John Mahama to approve him.

He also denied claims by Kennedy Agyapong that he has information about the medical records of Martin Amidu.

“President John Dramani Mahama gave us clearance to approve Amidu as Special Prosecutor and we did approve him. The issue of his medical record never came up in our discussion”, he said.