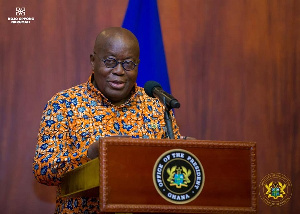 President Nana Addo Dankwa Akufo-Addo has asked the chiefs and people of Hohoe in the Volta Region to re-elect him in the December 7 general elections to ensure that the Eastern Corridor road is fully completed.

He made this vow when he resumed his campaign tour on Saturday, 21 November 2020.

President Akufo-Addo said: “I have absolutely no difficulty in making this commitment today that if by the grace of God, ‘four more for Nana’ comes through, the Eastern Corridor road will be completed within that time in its entirety without a shadow of a doubt.”

“Already, a considerable amount of the work has been done and with a little bit more time, we will complete it,” he added.

Mr. Akufo-Addo also intimated that the Volta Region, even though has a history of voting massively for the National Democratic Congress in elections, has seen very little development over the years.

“I am sure that all of you have seen that today, the umbrella has got nothing but holes in it. It can no longer act like an umbrella, it got holes in it. When it rains and you put it up, the water will be upon you because it’s no longer working as an umbrella,” he noted.