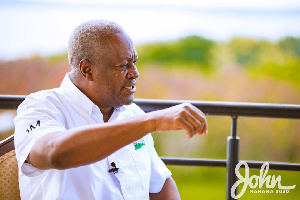 Speaking to supporters of the main opposition National Democratic Congress (NDC) at Aboabo in the Asawase Constituency of the Ashanti Region on Sunday, 22 November 2020, the presidential candidate said Mr. Akufo-Addo’s decision to abandon projects started in the region by the erstwhile administration, is indicative of how much he does not take the votes of the governing New Patriotic Party’s stronghold seriously.

According to Mr. Mahama, the President takes “Ashanti votes for granted”, thus, urged the people of the region to vote the NDC back into power to continue all the development projects that have stalled under the Akufo-Addo government.

“Nana Addo takes your votes for granted and that is why he ignored you after the election in 2016”, Mr. Mahama told the supporters.

“He doesn’t have an automatic right to a second term so return the party that brings you progress back into power”, he urged.