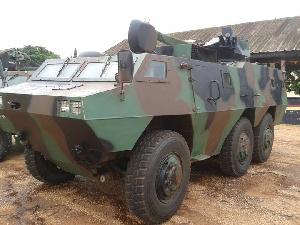 The Ghana Armed Forces have denied claims that it has changed the location for its Armory from Accra to Ho for today’s polls.

An audio which is in circulation on social media suggests that the Army has moved its Arms from Accra to Ho in an attempt to intimidate the people of the Volta and Oti Regions and to scare them from going out to vote.

The Army has denied claims of deploying Soldiers and Arms to only the Volta and Oti Region in a statement issued and signed by Colonel E Aggrey-Quashie, Director of Public Relations of the Ghana Armed Forces

The Army also denied a statement that suggested that there are members of vigilante groups who are embedded in the army personnel deployed to the various regions and constituencies.

EC sets up at various polling centres in Navrongo Central

No vigilantes embedded among us, no plot to intimidate voters in Volta, Oti Regions – Ghana Armed Forces