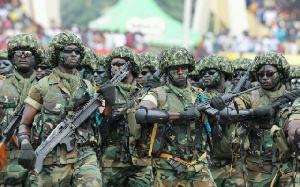 The Ghana Armed Forces (GAF) has denied rumours circulating on social media that it intends using vigilantes embedded within it, to launch a ground offensive from the eastern border.

The military has also described as false, claims that it is plotting to intimidate voters in the Volta and Oti Regions, strongholds of the biggest opposition National Democratic Congress (NDC).

A statement signed by Col. E. Aggrey Quarshie, Director of Public Relations of the military, said the rumours were fabrications.

Read the full statement of the Ghana Armed Forces below:

The Ghana Armed Forces (GAF) finds it necessary to respond to two messages on social media, which impinge its professional integrity. One is an audio recording and the other, a written statement.

They both make unfounded commentaries on the GAF, which need to be corrected.

The audio recording by an unidentified male voice, alleges the relocation of “gadgets” from Accra to Ho, to intimidate the people of the Volta and Oti Regions in collaboration with a neighbouring country.

The fact of the matter is that the GAF has deployed to all the regions of Ghana in connection with the 2020 General Elections.

The deployment is in support of the Ghana Police Service and this is standard practice. There is no other motive.

The second is a statement by a purported “Concerned Officers of the Ghana Armed Forces and the Ghana Police Service”.

This piece is a catalogue of falsehood and fabrications with no scintilla of truth in them.

Among the allegations are that vigilantes are embedded in the GAF and that there is a planned “coordinated ground offensive” from the eastern border on the night of 6th December.

This might either be an orchestration or a planted story to cause alarm among the local population.

All Ranks of the GAF are hereby implored to go about their duties with their usual focus and determination, to ensure the success of the elections.

The general public must also feel free to cast their ballots when the polls open on 7 December 2020.

No relocation of armory to Volta, Oti Regions to intimidate voters – Armed Forces