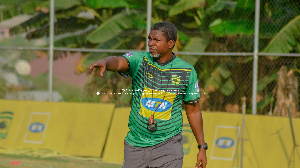 The Ghana Football Association has referred Asante Kotoko coach, Maxwell Konadu, to the Ethics Committee over comments he made against Referee Daniel Laryea, after their 1-1 drawn game against Berekum Chelsea.

A late free-kick strike by Emmanuel Clottey ensured that Asante Kotoko’s quest to get their first win in the 2020/2021 Ghana Premier League, was crushed at the Golden City Park in Berekum on Sunday, November 22, 2020.

Maxwell Konadu after the game, complained about the performance of the referee saying that “It’s was a very good and tough match. I said we came to win and that is what we wanted to do exactly. And had it not been the referee, it could have ended differently.”

“He is a referee I respect so much but then in the last minute, I don’t know what came over him. But that is football, you accept it in football and move on,” Maxwell Konadu said at the post-match press conference.
However, the GFA through their Communications Department has referred Maxwell Konadu for making derogatory remarks about the match official on the day.

Read the full statement of the GFA below:

The Ghana Football Association (GFA) has referred Asante Kotoko Coach, Maxwell Konadu to the Disciplinary Committee for comments made against Referee Daniel Laryea, after the game between Brekum Chelsea and Asante Kotoko on matchday 2 at the Brekum Golden City.

Club officials and stakeholders were reminded by the GFA ahead of the season to seek redress using the appropriate procedure and made available referee Complaint Forms to all Clubs.

Clubs are to seek redress by filling the form, indicating time, incident, culprits, and submitting to the match review panel within 48 hours after the said match.

The Match Review Panel will then review the performance of the referee or match official and issue a decision on the said incidence.

Clubs, players, and officials are urged to use the appropriate processes to address all grievances rather than resorting to making comments against match officials after the game.